Sweet, fresh taste of the countryside 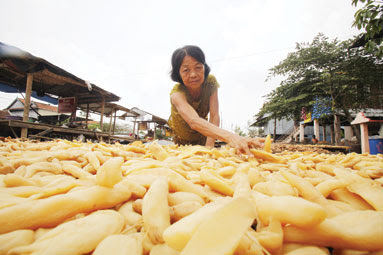 Kim Lay, 60, sorts the peeled radishes before they are salted and laid out to dry in the sunlight. Photo by: HENG CHIVOAN 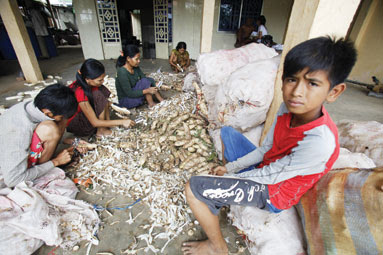 Ky Heng shows how they are salted in giant clay jars. Photo by: HENG CHIVOAN
http://www.phnompenhpost.com/


via CAAI
Thursday, 05 May 2011 15:00 Ou Mom
DRIVING along National Road 21 from Phnom Penh by the Mekong River, you’ll smell the scent of dried radishes on sale in stalls.
They’re a popular snack in Cambodia, with the sweet versions being eaten fresh, and the dried salty radishes giving extra flavour to soups and traditional dishes.
Sitting near many sacks of fresh radishes in front of her house, 60-year-old Kim Lay explains how she and her husband Ky Heng changed from growing sugar palms three years ago.
Their village of Prek Snay in S’ang District, Kandal province, is a centre for growing radishes, with many locals making a good living.
Says Ky Heng, 66: “Because we’ve seen most villagers make a good business from dried radishes, we decided to buy them from wholesalers.
“To make dried radishes, we have to spend about 10 days drying them after we’ve peeled them.
“At first, after peeling off the skins, we need to steep them with plenty of salt in big jars, until the bitter juices run,” he says, pointing to many jars in front of his house next to the store along the national road.
“In the morning, we need to lift the radishes out from the salt water, rinse them, and again pack them with salt to keep them for many months or a year without deterioration,” he says.
“To make sweet dried radishes, we have to put salted radishes in the sunlight until they are dry, and then further dry the pieces out over sugarcane for several days more,” Ky Heng says.
“Finally we need to put them in sugar again, drying them out to become crisp, or adding lemon for extra taste and flavour.”
Harvest time is busy for the villagers, who find odd jobs peeling and slicing radishes during the season.
Housewife Song Phalla, 40, says she can earn from 8000 riel (US$2) to 10,000 riel in a day by working for her neighbours.
“They give me from 2000 riels to 2500 riels for each sack of radishes,” she says. “Sometimes when my little children are free from their schoolwork, they also can do it as well.”
Wholesaler Kan Sopheng is perhaps the king of S’ang District, selling up to 100 tonnes of the vegetable each month. That can vary from 3 tonnes to 5 tonnes each day.
Posted by CAAI News Media at 10:44 pm