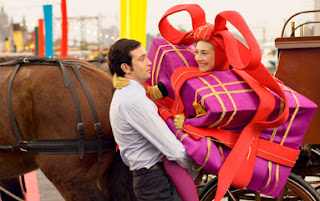 Actors in Love is All, screening tonight at 7pm on the Diamond Island open-air screen.
http://www.phnompenhpost.com/


via CAAI
Thursday, 05 May 2011 15:00Roth Meas
A RARE chance to see recent European films focusing on youth can be taken this week in the European Union’s ninth European Film Festival in Phnom Penh, running until Monday, May 9.
Seven movies have been scheduled throughout the festival, which began on Tuesday, from seven European countries.
EU chargé d’affaire Rafael Dochaeo Moreno said the focus was on youth this year because 60 percent of Cambodian’s were aged under 26 and so, play an important role in society.
“Young people are the future of the country, and young Cambodians will one day be leaders in their own country,” he said.
Films in the festival will be screened at two venues for the first time this year, at Diamond Island and the French Cultural Centre (CCF).
Free open-air screenings at 7pm at Diamond Island, are designed to appeal to youngsters because it’s a popular evening meeting place.
Moreno said that these movies would help young Cambodians understand more about the lives of young people in Europe. Though Europe is far from Cambodia, he said youths in both continents shared the same feelings.
“In fact, we can imagine that young Europeans and young Cambodians have exactly the same problems, because what young people have in mind are love, friendship, work, studying to get a good job and money,” said Moreno.
The cinema would act as a bridge between the different cultures, he said.
All movies screened at Diamond Island are dubbed into Khmer, while screenings at CCF will be aired with the original soundtracks and English subtitles.
Posted by CAAI News Media at 10:40 pm