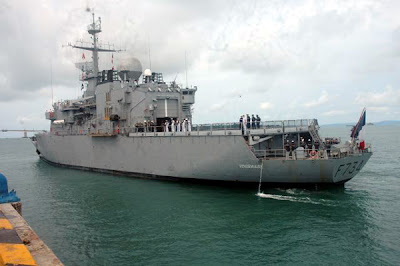 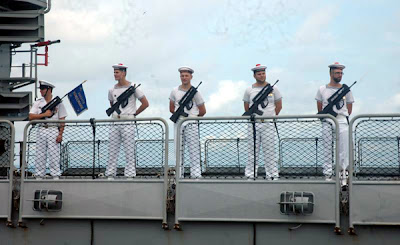 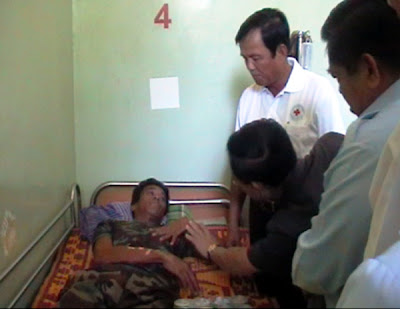 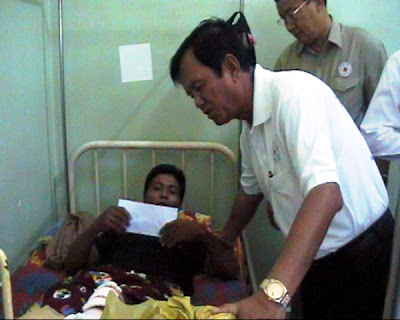 Siem Reap Provincial Governor H.E. So Phirin accompanied by his colleagues on May 3 visit Cambodian injured soldiers at the provincial hospital. The soldiers were injured by the recent Thai troops’ artillery shelling at Cambodia’s Ta Krabei and Ta Moan temples.
Photo: Hang Seak, AKP-Siem Reap
______
Statement of the Spokesman of Ministry of National Defense
AKP Phnom Penh, May 5, 2011 – The following is the statement of the spokesman of the Ministry of National Defense over the result of the meeting between Cambodian-Thai military commanders on May 4: 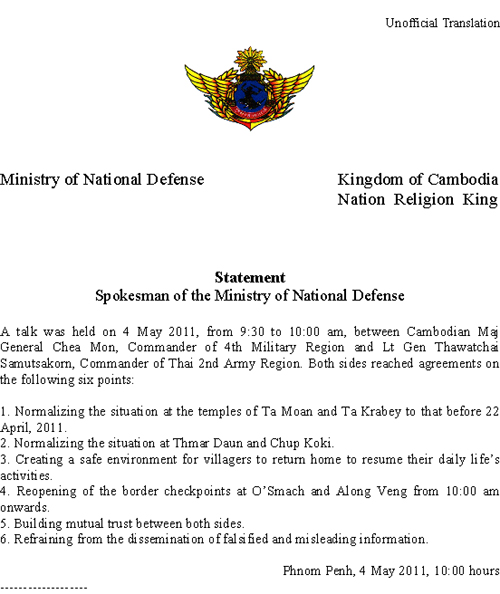 ______
9th EU Film Festival Opened
AKP Phnom Penh, May 5, 2011 – The 9th Annual European Film Festival was opened in Phnom Penh on May 3 in the presence of Mr. Rafael Dochao Moreno, Chargé d’Affaires a.i. of the EU Delegation to Cambodia.
This week-long festival is aimed at bridging the culture of the European countries and that of Cambodia, said Mr. Rafael Dochao Moreno at the opening ceremony.
The theme of the festival varies from year to year, he said, indicating that last year, it focused on women’s issues, while this year it particularly focuses on youth – their daily lives, their works, their studies and other activities.
Different films from Belgium, France, Germany, Spain, Holland, Portugal, Sweden and other European countries, as well as from Cambodia have been screened at the French Cultural Center and Koh Pich Convention and Exhibition Center in Phnom Penh from May 3 to 9.
By SOKMOM Nimul
______
National Defense Ministry Team Wins 2011 Sepak Takraw Championship
AKP Phnom Penh, May 5, 2011 – The National Defense Ministry team won the 2011 National Sepak Takraw Championship, which was wrapped up here at the National Olympic Stadium last Sunday.
Altogether 299 players from 15 Sepak Takraw clubs throughout the country joined the five-day event.
Undersecretary of State for the Ministry of Education, Youth and Sports H.E. Bou Chum Serey presided over the tournament’s closing ceremony.
By OU Sokha
Posted by CAAI News Media at 10:35 pm