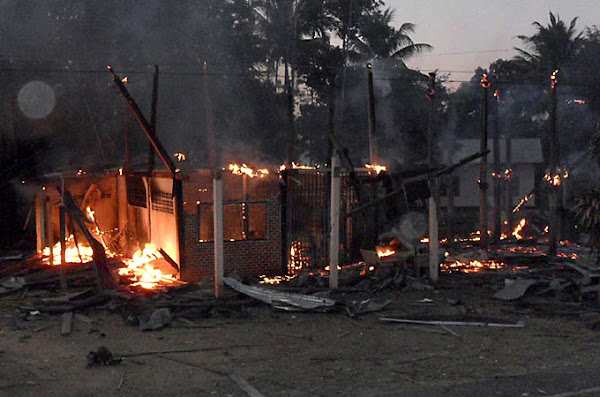 Thailand and Cambodia both claim rights to the land surrounding the 900-year-old Hindu temple [Reuters]
At least two people have been killed in clashes between Thai and Cambodian forces on their disputed border, in some of the fiercest fighting seen between the two sides in years.
A Cambodian soldier and a Thai villager were killed, and five Thai and four Cambodian soldiers injured, officials said, during a two-hour artillery exchange on Friday.
The fatalities are the first since a Thai soldier was killed a year ago, and could threaten to exacerbate tensions between the two countries over land surrounding a 900-year-old Hindu temple.
Hor Namhong, Cambodia's foreign minister, said his country would file a complaint with the UN security council, accusing Thailand of invading its territory.
Cambodia's information minister said the clashes began when Thai troops ignored warnings to stop crossing into Cambodia and then sought to remove a Cambodian flag from a small temple in the disputed territory.
"We don't want to say that it was intentional. It could have been caused by a misunderstanding," he told the AP news agency.
A Thai TV station showed villagers fleeing for safety during the clash.
Spying sentences
The area around the Preah Vihear temple, a UN World Heritage site, is claimed by both countries, although the International Court of Justice ruled in 1962 that the temple belongs to Cambodia, but did not determine the ownership of a small plot of land next to the ruins.
Ties between the two countries deteriorated after the temple was granted UN world heritage status in July 2008, with Thai nationalists arguing that the action threatened their country's sovereignty.
Both countries have built up military forces at the border.
Friday's clashes come three days after a Cambodian court handed down jail terms of six and eight years to two Thai nationalists found guilty of trespassing and spying in the border region.
It also coincided with meetings in Cambodia between Kasit Piromya, the Thai foreign minister, and his Cambodian counterpart, aimed at reducing tensions.
Unrest in Thailand's south
In a separate development, three security officers were killed by suspected Muslim separatists in Thailand's south.
A bomb killed killed two security officers while gunmen shot another in a separate attack, police said, the latest escalation of violence in the region.
It follows a bloody raid on an army camp, a massive roadside bombing, the execution-style shooting of a Buddhist family and several drive-by attacks in the past two weeks, which analysts believe was a political statement by Malay Muslim rebels seeking autonomy from predominantly Buddhist Thailand.
The intensification of violence comes after the government hailed the success of security operations and public relations campaigns in reducing the number of attacks.
Posted by CAAI News Media at 9:04 am