VIA caai
Published: 5/02/2011
An uneasy ceasefire was holding at the border with Cambodia after fierce fighting left two dead and resulted in the capture of five Thai rangers. 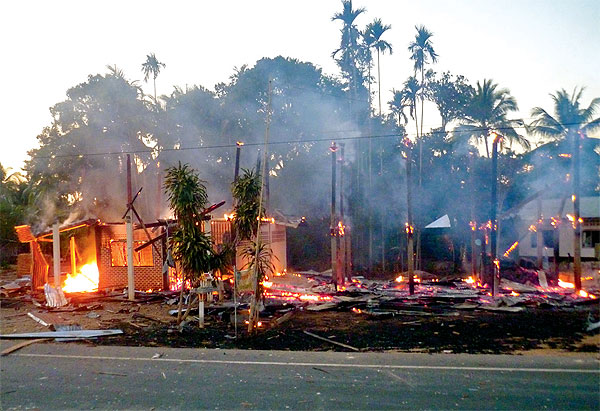 Houses at Ban Phum Saron in Si Sa Ket’s Kantaralak district burnt down when artillery landed in the village on the Thai-Cambodian border yesterday.
The two-hour clash between Thai and Cambodian troops near Phu Ma Khua area of Si Sa Ket yesterday killed at least two people - one Thai villager and one Cambodian soldier - and left several people injured.
Troops in nearby border provinces were placed on high alert as the capture of the five Thai rangers raised fears that the conflict could widen.
The five soldiers, who were based near Cambodia's Keo Sikha Kiri Savara pagoda, were detained by Cambodian troops.
The fighting included artillery exchanges and small arms fire, and partially destroyed communities on Thai soil.
The cross-border flare-up erupted about 3.15pm, a few hours after Foreign Minister Kasit Piromya and his Cambodian counterpart Hor Namhong met in Siem Reap and pledged to avoid violence in resolving border disputes.
Cambodian Information Minister Khieu Kanharith claimed the fighting erupted when Thai troops ignored warnings to stop crossing into its territory.
He said the Cambodians shot into the air and the Thai soldiers returned fire.
But Thailand disputed that account.
Army spokesman Sansern Kaewkamnerd said the clash was triggered by artillery rounds from the Cambodian side that fell on Thai territory.
"Cambodia didn't stop and started firing. We had to return fire," said Col Sansern shortly before the ceasefire.
Cambodia's artillery shells landed at Ban Non Chaeng and Ban Phum Saron villages, setting fire to four houses.
Charoen Pahom, a resident of Ban Phum Saron, was killed by artillery shells. Thai troops responded with heavy fire. 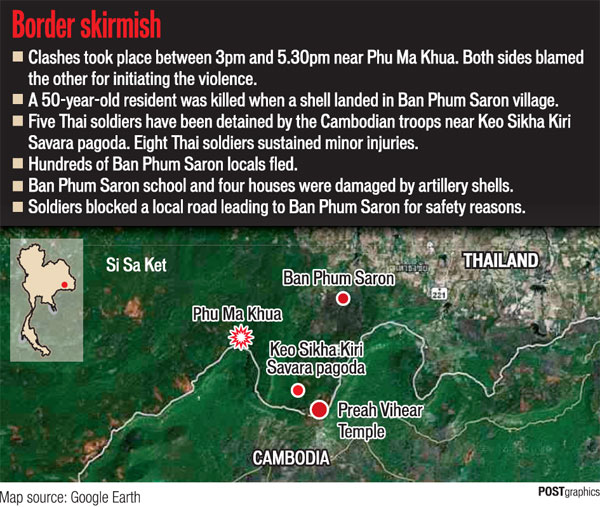 In Cambodia, privately owned Bayon TV reported that one Cambodian soldier was killed and five were wounded.
Shelling also damaged the roof of Ban Phum Saron school and the office of the tambon Sao Thong Chai administrative organisation. It also set part of the Keo Sikha Kiri Savara pagoda on fire.
Army commander Prayuth Chan-ocha said last night the shelling had now ceased and both sides are maintaining their positions.
Second Army Commander Lt Gen Thawatchai Samutsakhon, who is in charge of the border area, said: 'I don't want to say who started it because it will only prolong the issue. Let's say we both are doing what we're supposed to do."
Gen Prayuth said the fresh violence is likely to affect the World Heritage Committee's meeting called for June to discuss the development plan for the Preah Vihear temple, which is close to where the clash occurred.
Foreign Minister Kasit said the ministry will send a letter to Unesco and its member countries today calling on them to suspend any work involving the Thai-Cambodian border because any actions could intensify the conflict.
Mr Kasit said he held talks with senior Cambodian authorities after the clashes broke out, and both sides agreed to stop fighting.
'Both sides have agreed that we will try our best to avoid creating problems, but when a problem occurs, we have to end it as soon as possible," he said.
An army source said reinforcements of three battalions and heavy arms would be sent to the 4.6 square kilometre disputed area at the border. About 3,000 troops were deployed before the flare-up.
A source in the border area said the army's construction of a route and a bridge across a brook east of Pha Mor E-Daeng cliff has upset Cambodia.
Thai troops entered the area around noon yesterday.
Cambodia has claimed the area is in its territory and told the army to halt work, said the source.
The source said Cambodia is concerned that the route and the bridge will provide the Thai army with access to the Keo Sikha Kiri Savara pagoda and other sensitive areas.
The source said the area is part of the disputed territory and that Thai troops had occupied the area previously, but withdrew on Dec 1 last year.
According to the source, Cambodia had proceeded with construction of a 3.6-kilometre access road to Preah Vihear temple despite protests from Thailand that the work intruded on Thai soil.
Cambodian Defence Minister Tea Banh yesterday accused the Thai side of encroaching on Cambodian territory and violating an agreement.
An agreement reached by the Joint Boundary Commission states that construction cannot take place without a joint agreement.
"They [Thais] are saying that Cambodia started the shooting. We shouldn't focus on who started it, but on who violated the agreement," he said.
Thai army spokesman Col Sansern said the detention of the Thai soldiers might have stemmed from a misunderstanding.
"Those soldiers were sent to stand guard at a joint station with the Cambodians," he said.
Posted by CAAI News Media at 11:21 am