BANGKOK: Thailand and Cambodia have negotiated an end to fighting at their border on Saturday following renewed clashes around a disputed temple, both armies confirmed. 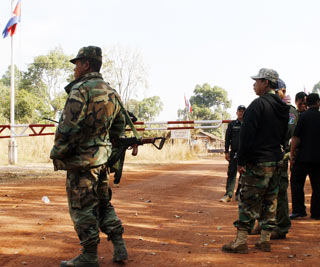 Cambodian soldiers stand guard near the Cambodian and Thai border at Anglong Veng district in Odar Meanchey province
Military commanders from both sides met for talks in a border town some distance from the 11th-century temple after gunfights broke out briefly early Saturday. At least three people have been killed so far in the fighting.
"Thailand and Cambodia have agreed a ceasefire and both sides will not reinforce their troops," Thai army spokesman, Colonel Sunsern Kaewkumnerd, told AFP.
A Cambodian general also confirmed the end to hostilities, but added that the "situation right now is still tense".
Both countries have accused the other of starting the latest violence and using heavy weapons such as mortars, rockets and artillery.
Earlier on Saturday, Cambodia's Foreign Minister wrote to the United Nations on Saturday, drawing its attention to the "explosive" situation on the border with Thailand, where three people have died in two days of fighting.
"I would like to draw your attention to the explosive situation at the border," said the letter addressed to UN Security Council president Maria Luiza Ribeiro Viotti.
The letter accused Thailand of starting the fighting, but did not explicitly ask for UN intervention.
"Facing this flagrant aggression, Cambodian troops had no option but to retaliate in self-defence," it reads.
Thailand, which convened an urgent security meeting on Saturday afternoon, has said it was also considering filing a complaint to the UN.
The United States urged both sides to exercise "maximum restraint".
Thailand has accused Cambodia of shelling a village, while Cambodia said Thai armed forces had fired artillery shells about 20 kilometres inside Cambodian territory.
Cambodia said the fighting had caused "serious" damage to the ancient Preah Vihear temple, which was granted UN World Heritage status in July 2008 straining ties between the neighbours.
The World Court ruled in 1962 that Preah Vihear itself belonged to Cambodia, although its main entrance lies in Thailand and the 4.6-square-kilometre area around the temple is claimed by both sides.
The Thai-Cambodia border has never been fully demarcated partly because it is littered with landmines left over from decades of war in Cambodia.
Thailand and Cambodia have been talking tough on the border issue, which some observers say serves nationalist goals at home on both sides.
Posted by CAAI News Media at 11:18 pm