Journeys Within: a tour company in Cambodia, a helping hand in Cambodian communities 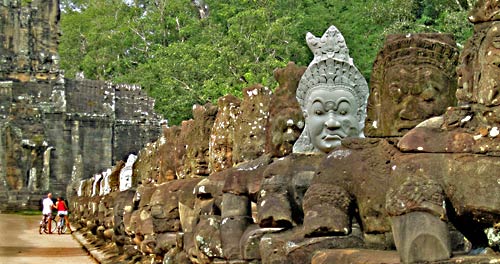 
via CAAI
By Susan Spano
Special to the Los Angeles Times
May 15, 2011
Reporting from Siem Reap, Cambodia —— Fifty years of civil war have left Cambodia a desperately poor and damaged nation with about a third of its 15 million people below the poverty line and a per capita gross domestic product of $739 a year.
When Brandon and Andrea Ross started Journeys Within, a tour company and B&B just outside Siem Reap, in 2003, they also were struck by the living conditions, especially in the countryside where people lack clean water, healthcare and all but rudimentary education.
Living here made Brandon, an American who grew up in Park City, Utah, appreciate his good fortune. At the same time, it changed him fundamentally. "I can't go back to seeing things the way I did before," he said.
The Ross travel enterprise, which offers special trips in Southeast Asia, such as a 30-day descent of the Mekong River from Yunnan Province in China to the delta in Vietnam, morphed into a charitable institution when the couple noticed how little money it takes to do big things in Cambodia. As Brandon explained, during a drought one year he saw women carrying water long distances and wondered about the cost of digging a well: $350.
Contributions from guests allowed the couple to develop Journeys Within Our Community into a U.S.-registered nonprofit organization that, along with digging village wells, provides university scholarships, free language classes and micro-loans for small businesses in Cambodia. Journeys Within travelers who contribute can take part in the programs by meeting students and visiting villages with new JWOC wells.
The organization has an annual budget of $180,000 and is kept small and locally rooted, with the Rosses, who now are the parents of two little girls, as its eyes and ears.
The couple became fascinated by the period from 1975 to 1979 when millions of Cambodians died at the hands of the Khmer Rouge or succumbed to famine and disease. In trying to understand the tragedy, Brandon and Andrea talked to survivors and visited places where the infamous history of the Khmer Rouge unfolded — stopping points on the itinerary they designed for me in October.
I took the Khmer Rouge tour to learn how the unimaginable happened in the little Southeast Asian nation, but along the way I found out something more pressing: how much is needed to right the wrongs and give the Cambodian people the same bright future everyone deserves.
Journeys Within Tour Co., bed and breakfast and charitable organization can be reached at (877) 454-3672 in the U.S., 011-855-123-7801 in Cambodia or at http://www.journeys-within.com
Posted by CAAI News Media at 10:49 pm

Howdy just wanted to give you a quick heads up and let you know a few of the images aren't loading correctly. I'm not sure why but I think its
a linking issue. I've tried it in two different internet browsers and both show the same outcome.

The Modern and Minimalist Appeal House

This house has been designed as a refined, leading to furniture shop in Cambodia construction materials said.
One more thing this house is started as the empty one with stunning views to say the least and it is changed into a modern getaway with minimalist appeal.
In addition this house is also created by chosen a monochromatic color palette, standout pieces like the gold chandelier , and then it is designed for entertainment with a crisp, white sofa warms up the space.
Anyway the mix of concrete and wood furniture is fitted for the modern beach living. Indeed it has also been decorated with natural textures such as a jute rug and palm leaves presented the beach landscape outside and white drapes frame the view has not distracting from it.

This is my website: One month after Sinha's death: There is no 'gunfight' in Cox's Bazar