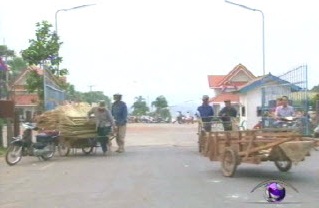 
via CAAI
SURIN, May 14 -- Cross border trade at Chong Jom border point with Cambodia in the Thai northeastern province of Surin was reportedly active this morning as many Cambodians crossed the border and bought large amounts of consumer products.
Surin's Chong Jom border point, which was reopened May 4 after it was closed by Thai officials following bloody clashes between Thai and Cambodian troops in the disputed border area on April 22, was seen as active again as many Cambodians crossed the border and bought consumer products, including vegetables and fruits. Shops owned by Thais and Cambodians were also open as vendors gained confidence that the situation has returned to normal in the area.
Many tourists were also seen wandering in the area.
Chong Jom border point is considered one of the key market places in Thailand's lower northeastern region which borders Cambodia.
At least Bt4 million changed hands at this border point on normal working days while trade is more lively on weekends. (MCOT online news)
Posted by CAAI News Media at 11:04 pm

It's awesome to pay a quick visit this website and reading the views of all mates regarding this piece of writing, while I am also eager of getting knowledge.

Fine way of describing, and nice post to get information about my presentation
focus, which i am going to deliver in school.

Did you create this site yourself? Please reply back as I'm trying to create my own website and would like to learn where you got this from or just what the theme is named. Cheers!

Here is my web-site ... wrist watches

Hello I am so excited I found your blog, I really found you by accident,
while I was looking on Bing for something else, Anyways
I am here now and would just like to say thank you for a fantastic
post and a all round interesting blog (I also love the
theme/design), I don't have time to read it all at the moment but I have saved it and also added your RSS feeds, so when I have time I will be back to read much more, Please do keep up the awesome job.

Here is my webpage wiki.fabrikaglamura.ru

This article provides clear idea designed for the new users of blogging, that in fact how to do blogging and site-building.