By The Nation
Published on February 5, 2011
PM says Thai troops reacted to Cambodian firing in worst flare-up over a decade; Phnom Penh vows to take the issue to UN Security Council today

Artillery exchanges between Thailand and Cambodia yesterday in the disputed area near the Hindu Preah Vihear Temple killed at least six soldiers and civilians on both sides as well as damaged property in one of the worst border flare-ups in a decade.
Phnom Penh plans to complain today to the United Nations over what it terms a "Thai invasion", Cambodian Foreign Ministry spokesman Koy Kuong said yesterday.
"We will lodge a complaint with the UN Security Council on Saturday [today]," he was quoted by Agence France-Presse as saying.
However, Thai Defence Minister Prawit Wongsuwan played down the significance of the incident. "We are negotiating now and I am sure that everything will be fine," 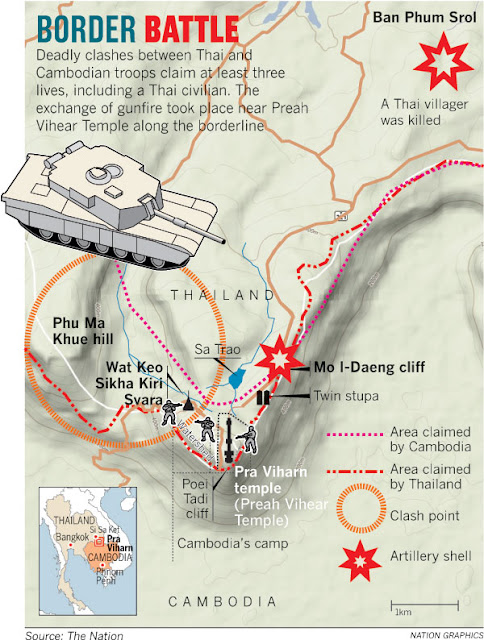 Army chief Prayut Chan-o-cha said the situation calmed down after 6pm and some Thai soldiers were slightly injured but a soldier on the ground contacted by The Nation via telephone said they were still engaged in the battle late last night. "So far we have lost two, and I was injured. We cannot go down the Phu Ma Khua hill," the injured soldier said in a short conversation before the line was cut.
After the fighting ended, Second Army Area commander Lt-General Thawatchai Samutsakhon and Si Sa Ket Governor Somsak Suwansujarit held talks with a Cambodian army commander at the Phra Viharn National Park about the clash.
Charoen Thahom, a 50-year-old resident of Si Sa Ket's Phum Srol village, was killed by an artillery shell that landed in his village while he was leading his family to seek shelter after the border skirmish broke out.
At least seven buildings, including one owned by Phum Srol School, were hit by artillery shells fired from the Cambodian side.
Three houses were set ablaze.
Prime Minister Abhisit Vejjajiva said last night that the Thai side fired warning shots and then responded to the Cambodian fire when the warnings were ignored. He added that the fighting now was over. However, he declined to confirm a report that Thai soldiers had been captured during the clash.
The clash occurred at a disputed border area near Phu Ma Khua hill at 3.15pm and the sound of gunfire was heard at Si Sa Ket province's Ban Phum Srol about 5 kilometres from the hill, villagers said.
"We were at a sports event when the sound of many weapons, including small arms and heavy weapons, was heard from the battlefield," a resident told The Nation via telephone.
Besides the civilian and soldiers fatality, five Thai soldiers were injured in the clash, according to Public Health Minister Jurin Laksanawisit.
Authorities told villagers to seek shelter and later evacuated them to safe areas deeper into Thai territory. Some of them moved to a downtown area of Kantharalak district, about 30km from the Preah Vihear Temple.
Thailand and Cambodia have been at loggerheads over the border area adjacent to Preah Vihear for a long time.
Both sides boosted troop numbers in the area recently after the People's Alliance for Democracy (PAD) staged a protest near the Prime Minister's Office demanding the government use force to kick Cambodians out of the area.
PAD leader Chamlong Srimuang said he was not happy with the border clash, since it damaged both sides. "It happened because Prime Minister Abhisit Vejjajiva showed weakness to Cambodia," he said.
Troops clashed in 2008 and 2009 in the same area, resulting in the deaths of more than 10 soldiers on both sides.
The clash this time was fiercer as it saw the use of artillery that hit civilians and their homes. Residents saw many shells land near their villages in tambon Sao Thong Chai.
Deputy Prime Minister Suthep Thaugsuban said Cambodian troops opened fire first, triggering the exchange of fire.
However, Cambodian government spokesman Phay Siphan said Thai soldiers had crossed 500 metres into Cambodian territory and opened fire first despite efforts of Cambodian troops to avoid violence.
"Although Cambodian soldiers tried to negotiate to stop the Thai soldiers from invading Cambodia, the Thai Army kept moving deeper into Cambodian territory and opened fire without provocation by Cambodian forces. We have the right to self-defence to protect our land against Thai invasion," he said.
Cambodian media reported that least two Cambodian civilians and one soldier died after Thai shells landed on the Cambodian side.
Cambodia reportedly held four Thai soldiers at Keo Sikha Kiri Svara Pagoda, which is in the disputed border area near Preah Vihear.
The clash broke out shortly after Foreign Minister Kasit Piromya finished a Joint Commission meeting with his Cambodian counterpart Hor Namhong in Siem Reap. They told reporters there that they were happy with the improving relations and agreed to use peaceful means to settle the boundary conflict.
Posted by CAAI News Media at 9:20 am