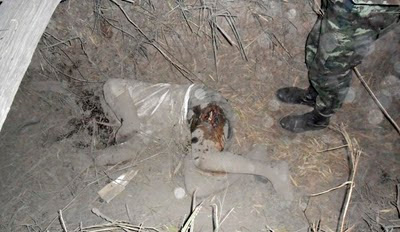 A Cambodian soldier inspect the corpse of a Thai soldier killed during the clash 4th Feb. 2011. Photo by Reuters and published by Paris Match.com.

via CAAI
By Ambika Ahuja Ambika Ahuja
BANGKOK (Reuters) – Thai and Cambodian soldiers exchanged fire in a two-hour border clash on Friday that killed two Cambodian soldiers and a Thai villager, the latest in an ancient feud over land surrounding a 900-year-old Hindu temple.
The fatalities were the first in the militarized border area since a Thai soldier was shot dead a year ago and could rekindle diplomatic tensions between the Southeast Asian neighbors over the 11th-century Preah Vihear temple.
Cambodian Foreign Minister Hor Namhong said Cambodia would file a complaint with the U.N. Security Council, accusing Thailand of invading Cambodian territory.
Both sides accused each other of firing first in the 4.6-sq-km (two-sq-mile) disputed area around Preah Vihear, a jungle-clad escarpment claimed by both countries and scene of deadly, sporadic clashes in recent years.
Several Thai soldiers were also wounded and four Thai villages were evacuated, Thai media reported. Five Thai soldiers were captured, said army spokesman Sansern Kaewkamnerd.
"It seems to have been a result of a misunderstanding," Thai army chief Prayuth Chan-ocha told reporters. "There is no point in fighting because it could escalate and damage relations... We don't want that."
The Cambodian government accused the Thai army of targeting Cambodian villagers and said the fighting erupted when Thai soldiers illegally entered Cambodia territory.
"We said to them 'don't come in the area' and they still came. We fired into the air and they began to shoot at us," said Cambodian government spokesman Khieu Kanharith.
CLASH MAY SPUR THAI NATIONALIST PROTEST
The clash comes three days after a Cambodian court handed down jail terms of six and eight years to two Thai nationalists found guilty of trespassing and spying in the border region, a verdict that has angered some in Thailand.
Shelling began at about 3 p.m. (0800 GMT) and continued into early evening. Artillery shells landed at several villages on the Thai side, setting at least four houses on fire, witnesses said.
A Thai police colonel, Chatchawan Kaewchandee, said at least one villager was killed during the shelling. "We found one body of a male villager and there might be more," he said.
The fighting could give a boost to a small but prolonged protest by Thailand's "yellow shirt" activists demanding Prime Minister Abhisit Vejjajiva take a tougher line against Cambodia.
Chamlong Srimuang, a yellow shirt leader, said his group would step up pressure on the government, saying the fighting showed that Abhisit was weak in handling border tensions.
"We have warned about this sort of thing for a long time. We didn't call for a clash just for the government to show our military strength precisely to prevent any clash from taking place," he told reporters.
The temple, known as Preah Vihear in Cambodia and Khao Phra Viharn in Thailand, sits on land that forms a natural border and has been a source of tension for generations.
The International Court of Justice awarded it to Cambodia in 1962 but the ruling did not determine the ownership of the scrub next to the ruins, leaving considerable scope for disagreement.
The fighting coincided with meetings in Cambodia between Thai Foreign Minister Kasit Piromya and his Cambodian counterpart aimed at reducing tensions. (Additional reporting by Prak Chan Thul in Phnom Penh; Writingby Jason Szep; Editing by Nick Macfie)
Posted by CAAI News Media at 10:21 am