Concert Will Raise Money For School In Cambodia 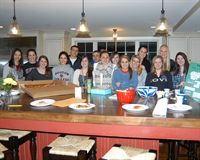 A group of Newtown High School students called Two Schools One Song is raising money through an upcoming concert on February 25 that will feature The Sean Fleming Band. The fundraiser will buy books and more for a school in Cambodia the group raised money to build last year. —-Bee Photo, Hallabeck
via CAAI
By Eliza Hallabeck
Last year a group of high school students, called Two Schools One Song, exceeded expectations and raised $15,000 to build a school in Cambodia. Now, with that school under construction, the group is again raising money through an upcoming concert to buy books and other supplies for the school.
After learning about the American Assistance for Cambodia program from their mother last year, then-Newtown High School junior Dan Sclafani and his then-freshman sister Jane asked their friends to help them raise the $13,000 to fund building a school in Cambodia. Through the American Assistance for Cambodia program, the World Bank meets donations of $13,000 to build a school in Cambodia for $26,000. Money raised beyond the original $13, 000 is not matched by the program, but it is used to pay for teaching positions, books, computers, and more.
"In December 2010," reads an announcement for the upcoming fundraiser, "construction began in the province of Kampong Thom in Cambodia with an anticipated completion date of April 2011. The school will have five classrooms with the capacity for 100 students, none of whom have ever attended school…"
The school will be named Newtown Village School, and the primary goal for Two Schools One Song this year, according to Dan and Jane's mother Kate Sclafani, is to raise funds to pay for an English teacher, computers, a garden, and two drinking wells, which will help the school's entire village.
The fundraising concert featuring The Sean Fleming Band is scheduled for February 25 from 7 to 11 pm at the Fox Hill Inn on Federal Road in Brookfield. Tickets for the event cost $75, and all donations to the group are tax deductible. A silent auction and black jack tables will also be at the event.
A pizza party for the group was held on Monday, January 31, for its members to meet and prepare for the upcoming fundraiser.
"They are so fantastic," said Ms Sclafani on Monday about the band. "They travel the whole country."
Two Schools One Song members Kimmy Gates and Sally Martinelli said the group is looking to raise as much money as they can for the school.
Jane Sclafani said this year's goal is to help the school with all the "extras."
Anyone unable to attend the concert who is interested to donate to the effort can also go to www.cambodiaschools.com and click on Rural School Project. The Newtown Village School is 494.
For further information about purchasing tickets or about donating to the effort call Kate Sclafani at 203-426-9729 or Maggie Conway at 203-426-4774.
Posted by CAAI News Media at 8:45 am