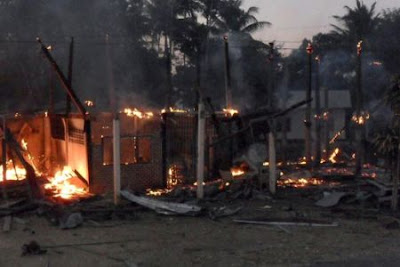 A house burns in a Thai village near an 11th-century Preah Vihear temple at the border between Thailand and Cambodia on February 4.
Thailand and Cambodia have agreed to negotiate to put an end to border clashes near a disputed 11th-century temple that killed at least four people.
"Thailand and Cambodia have agreed on a ceasefire and both sides will not reinforce their troops," Colonel Sunsern Kaewkumnerd, a Thai army spokesman, told AFP.
A Cambodian general also confirmed that the two sides had met in a border town to resolve the dispute. He said, however, the "situation right now is still tense."
Gunfights broke out early Saturday between the armies of the two countries near the Preah Vihear temple. Both sides have blamed the other for the fighting.
Cambodian Foreign Minister Hor Namhong also sent a letter to the UN Security Council Saturday to protest Thailand's "flagrant aggression."
The Thai Foreign Ministry also accused Cambodia of engaging in "an act of aggression," saying the Cambodian forces had violated “Thai sovereignty and territorial integrity."
Kaewkamnert said that one Thai soldier lost his life during Saturday's clashes and four others sustained injuries.
Reports say two Cambodian soldiers and one Thai villager were among the victims of the skirmish.
The fighting damaged the temple and forced thousands of people to flee.
The temple, which is perched on a cliff on the border, has been disputed by the two countries for several decades.
DB/TG/HRF
Posted by CAAI News Media at 11:35 pm