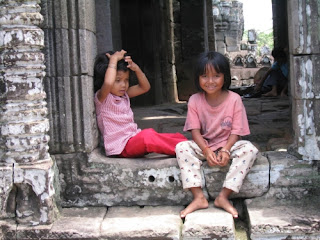 
Cambodia is a popular tourist destination; since 2007, it has seen more than 2 million visitors per year. Children selling books, postcards, small and trinkets dot the landscape and many tourists buy these wares thinking they are doing the children a favor. In reality, tourists are unwillingly contributing to child labor.
Current statistics about how many children engage in the informal tourism economy on a day-to-day basis are outdated. The ILO will next conduct a child-labor survey in Cambodia in 2011. In the absence of credible data, school attendance is often used as a proxy indicator for child labor; children in school are less likely to engage in child labor. In 2009, 94 percent of primary school-aged children were enrolled in schools.
The Royal Government of Cambodia is currently working with the international community toward achieving UNESCO’s Education For All (EFA) goals by 2015. These goals emphasize increased access to both formal and non-formal education for all children, gender equality, and better quality primary education.
Children who target tourists are trying to earn a daily wage to bring back to their families. They are not attending schools. Maggie Eno, Co-founder of M’Lop Tapang, an organization working with street Children in Sihanoukville province of Cambodia, told MediaGlobal. “Poverty leads them into a street-working lifestyle. Their parents are unemployed, have drug or alcohol addictions or are single parents who need to take care of little children and cannot work.”
The children usually approach tourists in restaurants, bars, or on the beach. Tourists buy their products, just so the children can go home and sleep. In turn, these children continue earning a wage by selling souvenirs to tourists. “As long as children are making money on the streets, it is difficult for our social workers to convince them and their families to leave the streets or beaches and go back to school or vocational training.” Simrin Singh, Senior Specialist on Child Labour at the International Labour Organization (ILO), told MediaGlobal, “Whilst this can have some positive consequences such as increased proficiency in foreign languages and communication skills, in the long term, lack of formal education will constrain human capital development, perpetuating poverty and therefore slowing economic development in the country.”
Cambodia is one the poorest countries in the world, with an estimated annual GDP per capita of US $783 in 2010 and a Human Development Index rank of 124 out of 169 countries in 2010, which is below the regional average of East Asia and the Pacific. Many Cambodians live in desperate economic need, families have limited resources and social inequality is high. Such conditions add greatly to the likelihood of commercial sexual exploitation, leaving Cambodian children especially vulnerable.
“While on the surface and comparatively speaking it may seem rather innocent for children to be selling merchandise to tourists, it is the exploitative and hazardous nature of the work that often does not catch the eye that makes this a form of child labor to be eliminated,” said Singh.
This seemingly innocent form of child labor can lead to more serious situations for the children involved. Singh emphasized “Children selling merchandise on the streets run the additional risk of being sexually exploited given the unprotected nature of their work. The risk of these children being exposed to and/or engaged in illicit activities, such as the drug trade or criminal activities cannot be underestimated.”
The Royal Government of Cambodia, Employers’ and Workers’ Organizations, local NGOs and civil society organizations are working with the ILO’s International Programme on the Elimination of Child Labour, fighting against all forms of child labor in the country. The ILO especially targets street vendors, street children, and children selling merchandise to tourists in the Angkor Wat complex and along the riverside areas in Phnom Penh.
Over 4,000 children are being prevented from further work and rehabilitated through formal and non-formal education as well as vocational training, while their families are being provided with income generation support and skills training, as well as access to self-help groups and microfinance institutions to assist in setting up small businesses.
One of the main challenges is providing alternative income opportunities for these families.
For those who want to help the Cambodian children they see on the streets, all is not lost. As Singh explained, “Tourists are encouraged to support families by buying merchandise from adults, thereby promoting much-needed adult employment, and to refrain from purchasing merchandise from children. In other words, let parents earn and children learn.”
Posted by CAAI News Media at 8:54 am