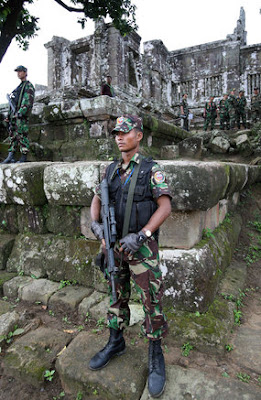 Cambodian civilian guards at Preah Vihear temple during a prayer ceremony for peace in 2008.
via CAAI
Two Cambodian soldiers had been killed and two wounded in a clash with Thai soldiers, Cambodian police say.
A Thai military official said fighting broke out over a disputed stretch of border near the ancient Preah Vihear temple.
Both sides accused each other of firing first in the heavily militarised area.
The official said an artillery exchange continued for over an hour.
Officials from both nations said the fighting was continuing.
The clash comes three days after a Cambodian court jailed two Thai nationalists who were found guilty of trespass and spying on the border.
The verdict angered Thai nationalists.
A protest by "Yellow Shirt" activists in Bangkok has put pressure on Prime Minister Abhisit Vejjajiva to take a tougher stance in the dispute.
Posted by CAAI News Media at 12:44 am