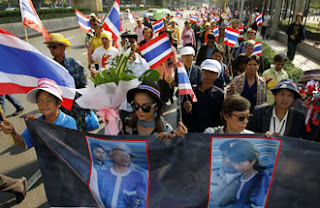 Thailand's nationalist group, People's Alliance for Democracy (PAD), has issued an ultimatum to Prime Minister Abhisit Vejjajiva. -- PHOTO: REUTERS
via CAAI
Feb 4, 2011
BANGKOK - THAILAND'S nationalist group, People's Alliance for Democracy (PAD), has issued an ultimatum to Prime Minister Abhisit Vejjajiva, saying it will intensify its protests in Bangkok if the government fails to secure the release of two Thais jailed in Phnom Penh for espionage within three days.
Mr Abhisit responded by saying he would like to bring them back even sooner than three days, but did not know how to achieve such a goal. 'Everybody wants to bring them back today, but please tell me how this can be done. We have managed to get five people freed, and would like do the same for the remaining two,' he said.
High-profile nationalist activist Veera Somkwamkid and his aide Ratree Pipatanapaiboon plan to appeal Tuesday's verdict by the Cambodian court, which sentenced them to eight and six years in jail. However, an appeal would extend the judicial process and may result in an even longer jail term. The Thai government would prefer them not to appeal, so the judicial process can be completed, leaving the way open to a possible royal pardon.
Veera and Ratree were arrested together with other five Thai nationals, including ruling Democrat Party lawmaker Panich Vikitsreth, near Sa Kaeo province's Ban Nong Chan while inspecting a disputed border area. The five admitted they crossed into Cambodia by accident, and were able to walk free after the court suspended their nine-month jail terms. A defiant Veera insisted in court he was arrested in territory under Thai sovereignty - so the Cambodian court had no authority to rule against him.
Hundreds of yellow-shirt protesters, including members of the PAD's Thai Patriots Network (TPN) faction, have been camping near the PM's Office since last month to pressure the government to take tough action over the border row and Veera's case. The PAD has threatened to call a huge rally on Saturday. -- THE NATION/ANN
Posted by CAAI News Media at 12:37 am