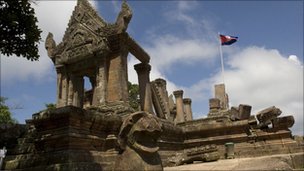 Cambodia secured the World Heritage listing of the ancient Preah Vihear temple in 2008
Thai and Cambodian soldiers have exchanged fire on a disputed stretch of their border near an ancient Hindu temple, claimed by both countries.
A Thai military spokesman confirmed that "sporadic shelling" had taken place in the disputed zone.
Tension has been rising in the region in recent days - with both sides moving in more troops.
It is the latest in a series of shooting incidents in the Preah Vihear region over the past three years.
A Cambodian government spokesman told the BBC that the shooting started at about 1500 local time (0800 GMT).
He blamed the encroachment of Thai soldiers on Cambodian territory for the fighting - and said a similar incident had only narrowly been avoided on Thursday.
Witnesses in the area said that Thai troops had attacked a Cambodian Buddhist pagoda in a border area claimed by both sides.
There has been tension in the region ever since Cambodia secured the World Heritage listing of the ancient Preah Vihear temple in 2008.
This caused joy in Cambodia, and anguish in Thailand - which once claimed the temple.
This week there has been a build-up of troops and armoured vehicles along the border, as both sides have accused one another of encroachment.
Posted by CAAI News Media at 12:33 am