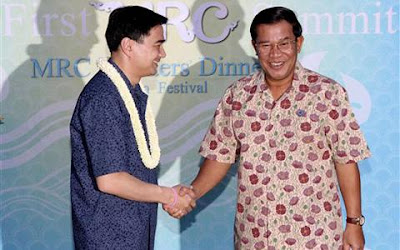 Photo: AP
Thailand Prime Minister Abhisit Vejjajiva shakes hand with Prime Minister Hun Sen of Cambodia
Anti-government “yellow shirt” protesters have made it hard for the current Thai prime minister, Abhisit Vejjajiva, to compromise on border issues."
Current tensions on the border have a root in Thai politics, as Thailand heads into heavily contested elections some time this year, analysts say.
Since the 2008 listing of Preah Vihear temple as a Unesco World Heritage site under Cambodian management, Thailand has seen a number of popular uprisings between supporters of ousted premier Thakisn Shinawatra and supporters of the current government.
Those uprisings have disrupted regular Thai administration procedures, and the country is bracing for elections that must be held by year’s end.
Cambodia and its disputed border areas of Thailand play into that, said Chheang Vannarith, executive director of the Cambodian Institute for Cooperation and Peace.
“The Cambodia issue is still a tool in local Thai politics,” he said. The border issue can be an instrument to divert attention away from local problems, he said.
Anti-government “yellow shirt” protesters have made it hard for the current Thai prime minister, Abhisit Vejjajiva, to compromise on border issues, he said. But the border disputes can also provide a “dancing beat” for Abhisit and his party to garner support from more nationalistic voters.
Ros Chantraboth, a Cambodian historian, said that Thai politicians are gaining power and popularity by generating more opposition groups—with each side hedging by having groups that both support and protest border resolutions and other matters.
That creates an atmosphere of delays, he said, in political debate and problem solving, until a general election is organized. That in turn has made Cambodia a “hostage of internal Thai politics,” he said.
The current atmosphere means there is no chance to resolve the ongoing border issues, Chheang Vannarith said. “Cambodia has to wait for a new Thai leader who is willing to solve the border issue.”
Government spokesman Phay Siphan said Thai political strategists have used the border situation to unseat two prime ministers.
Abhisit is facing a similar situation, Phay Siphan said. Abhisit has so far refused “yellow shirt” demands to annul agreements made in 2000 that would help resolve disputed border regions and has turned to Cambodia to peacefully resolve the border disputes, Phay Siphan said.
Sean Pengse, an independent border export in France, said the border issues won’t be solved soon, with Thailand “provoking the issue” for Cambodia’s not retaining a balanced policy between its western neighbor and Vietnam.
Posted by CAAI News Media at 8:51 am