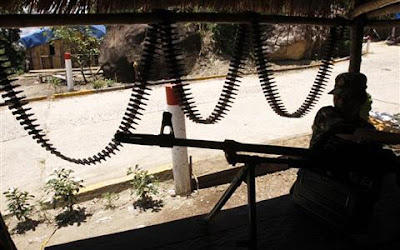 Photo: AP
Shooting between Cambodian and Thai soldiers broke out Friday, Feb. 4, 2011, near the Preah Vihear temple, which belongs to Cambodia.
"Cambodian soldiers returned fire, leading to subsequent clashes at different sites along 8 kilometers of border."
Cambodian and Thai troops were engaged in intense, sporadic fighting near Preah Vihear temple for nearly three hours on Friday afternoon, officials in Phnom Penh and on the border said.
Fighting included the firing of multiple rockets from vehicle platforms and from tanks, Cambodian military officials said.
Government spokesman Phay Siphan said Thai soldiers had entered Cambodian territory near Veal Entry, not far from the contentious Preah Vihear temple, and fired on Cambodian troops. Cambodian soldiers returned fire, leading to subsequent clashes at different sites along 8 kilometers of border, he said.
A Thai spokesman said initial reports did not indicate the cause of the incident but the situation was under control and authorities were seeking the official cause.
Friday’s clashes represented the most intense so far between military forces that have been entrenched near the border since 2008, when both sides bolstered their troop presences in response to protests over the inclusion of the 11th-Century Preah Vihear temple on a Unesco World Heritage protection list under Cambodian management.
The clashes coincided with bilateral border discussions between the two countries’ foreign ministers in Siem Reap on Friday.
Wat Keo Siha Kiri Svara pagoda, which was built by Cambodians on land Thailand says is disputed, was destroyed by Thai artillery fire, military officials said. That pagoda was at the center of a diplomatic dispute earlier this week, with Cambodia refusing Thai calls to lower its national flag at the site.
A Cambodian colonel stationed near Preah Vihear temple told VOA Khmer the clashes lasted from around 3 pm to 6 pm. Military officials were now totaling the damages and hoped to have figures by Saturday. No fatalities were reported by Friday evening.
Panitan Wattanayagorn, a spokesman for Thai Prime Minister Abhisit Vejjajiva, told VOA Khmer that the exact cause of the incident was not yet known.
“The situation is now under control, and we hope to communicate to the Cambodian authorities about the incident,” he said.
Thai civilians had been evacuated to safe areas, but initial reports indicated “limited” casualties and damages, he said.
Foreign Minister Hor Namhong said late Friday after talks in Siem Reap that Cambodia would file an official complaint to the UN Saturday.
Posted by CAAI News Media at 8:32 am