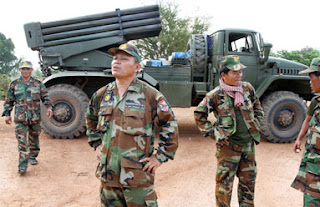 
Monday, 02 May 2011 15:02Vong Sokheng and Cheang Sokha
ONE more Cambodian soldier was killed yesterday morning and another was injured in fighting along the border near Oddar Meanchey province, as Thai and Cambodian troops again violated a ceasefire brokered by commanders in the area on Thursday.
Nine Cambodian troops in total have been killed since fighting broke out on April 22 near the centuries-old temples of Ta Moan and Ta Krabey. In Thailand, meanwhile, seven troops and one civilian have been killed.
Yesterday’s violence, which followed sporadic clashes on Friday and Saturday, came despite a Thursday meeting between Royal Cambodian Armed Forces General Chea Morn and Royal Thai Army General Thawatchai Samutsakorn in which they agreed to a ceasefire in Oddar Meanchey.
Commanders met again yesterday in a bid to ease tensions in the area after similar talks on Friday, said Reurn Heng, an RCAF soldier stationed on the frontline.
A statement issued yesterday by the Ministry of Defence accused Thailand of breaking the ceasefire, calling the move “unacceptable”.
“We appeal to the Thai troops to maintain the value of their promise and strictly implement the principles of the ceasefire,” the statement read. “The Royal Cambodian Armed Forces showed the utmost restraint despite the casualties.”
From the start of the clashes last month, each side has accused the other of being the aggressor.
True to form, Thai Foreign Ministry spokesman Thani Thongphakdi yesterday accused Cambodia of touching off the latest hostilities.
“We’re disappointed that the Cambodian side hasn’t been able to maintain the ceasefire,” he said. “At the same time, looking positively, this could be due to communications problems among the various units of the Cambodian forces themselves, which we hope will be addressed in the near future to avoid further conflict.” In addition to the 17 killed, tens of thousands of residents living on both sides of the border have been displaced by the fighting, including over 45,000 Cambodians.
It comes less than three months after similar clashes along the border roughly 150 kilometres away, near Preah Vihear temple, which left 10 dead.
Tensions have been heightened along the border since 2008, when Preah Vihear was enshrined as a UNESCO World Heritage site for Cambodia over Thai objections.
In 1962, the International Court of Justice in The Hague awarded the 11th-century temple to Cambodia. Thailand does not dispute this ruling, but claims sovereignty over a 4.6-kilometre piece of territory adjacent to the site that officials here say belongs to Cambodia.
Last week, Foreign Minister Hor Namhong traveled to The Hague to ask the ICJ to expand upon its earlier ruling to also address the piece of territory in question.
Speaking on Saturday at Phnom Penh International Airport after returning to the Kingdom, Hor Namhong said the request had been made “because of Thai soldiers’ repeated acts of aggression in Cambodian territory, even when there was an agreement [made in February] for a permanent ceasefire”. “We are unlucky when speaking with the tricky Thai leaders, so now we leave the issue for the ICJ,” he said. “We cannot trust Thailand.”
In response to this request, Thailand’s Foreign Ministry said in a statement on Friday that Cambodia was “disregarding the bilateral commitments already made and bypassing the ongoing efforts by the [Association of Southeast Asian Nations] family just days ahead of the ASEAN summit”.
Prime Minister Hun Sen said last week that he planned to raise the border conflict at the upcoming ASEAN summit, to be held in Jakarta on May 7 and 8.
ASEAN chair Indonesia has previously attempted to mediate in the conflict, offering to dispatch teams of unarmed military observers to both sides of the border to preserve a ceasefire. The observers’ arrival has since been delayed due to hesitation from Thailand.
Hor Namhong said on Saturday that Thailand had finally accepted the Indonesian proposal, but had stipulated that observers be sent to the Svay Chrum area, well inside the Cambodian border in Preah Vihear province.
“I told the Indonesian Foreign Minister that I cannot accept Thailand’s request to dispatch Indonesian military observers to Svay Chrum,” Hor Namhong said. ADDITIONAL REPORTING BY JAMES O’TOOLE
Posted by CAAI News Media at 12:22 am

We need to give our soldiers with the best weapons and high tech weapons to help them fight off our enemy better...You can't fight with outdated weapons from world warII today..?