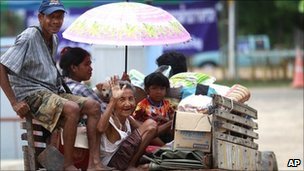 Local people have been staying in camps and temples to avoid the fighting
http://www.bbc.co.uk/
via CAAI
2 May 2011
Civilians who fled fighting between Thailand and Cambodia have begun returning home, as 10 days of border clashes eased.
Tens of thousands of villagers had been staying in temporary camps and temples as troops exchanged artillery fire in jungle areas both sides claim.
A truce agreed on 28 April did not end the fighting but reduced its intensity.
The clashes, which began on 22 April, have killed 17 people, including one civilian.
"These people have returned to their houses because the situation now is calm," said Pech Sokhen, the governor of Cambodia's Oddar Meanchey province.
"I hope that the fighting between the two sides will keep decreasing over time."
Thai Prime Minister Abhisit Vejjajiva confirmed people were returning to their villages. "The military will monitor the border. We will remain very careful," he said.
The fighting has not stopped completely. A Cambodian commander said Thai shelling continued on Sunday night, while a Thai commander said the two sides exchanged automatic fire - but reports say it is confined to smaller areas.
It has centred around the two temples of Ta Moan and Ta Krabey, which sit in a hilly jungle area that both sides say belongs to them.
Clashes were also reported last week at the hill-top temple of Preah Vihear, a flashpoint for the dispute.
Parts of the Thai-Cambodian border have never been formally demarcated, spurring nationalist sentiment in both countries.
Fighting took place three years ago in the run-up to a general election in Cambodia, and this latest outbreak comes with the Thai government due to call an election in the coming days.
Posted by CAAI News Media at 7:56 am