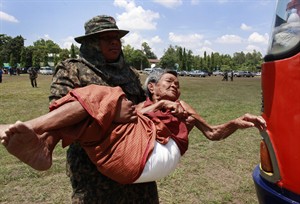 A Thai soldier takes an elderly villager to a waiting bus to transport her home after sporadic fighting between Thai and Cambodian troops was reported on Monday, May 2, 2011 at a refugee camp in Surin province, northeastern Thailand. A Cambodian soldier was killed in fighting with Thailand on Sunday, bringing the total number of dead to 17 as the Southeast Asian nations' festering border conflict dragged on. (AP Photo/Wason Wanichakorn)
via CAAI
By The Associated Press
BANGKOK — Tens of thousands of Thai villagers who fled fighting along the border with Cambodia began returning to their homes Monday.
Prime Minister Abhisit Vejjajiva said with combat winding down to exchanges of small arms fire instead of artillery duels, people could safely leave makeshift refugee camps.
A total of 16 soldiers and one civilian from both sides have died since the fighting began April 22. A decades-old dispute over patches of land along the border has been the trigger for combat, but nationalistic posturing for domestic political purposes on both sides has heightened tensions.
Serm Chainarong, the governor of Thailand's northeastern province of Surin, where most of the recent clashes took place, told reporters he has allowed 44,000 villagers evacuated from the combat zone to return home from 35 makeshift shelters.
Local commanders for both countries last Thursday held talks that led to a de facto cease-fire, which did not actually end the clashes but reduced their intensity.
A Cambodian field commander, Col. Suos Sothea, said from the front-lines that Thai soldiers had carried out shelling with artillery and mortars from late Sunday through early Monday morning, with no casualties. Thai field commanders said the two sides exchanged automatic weapons fire Sunday evening but did not use artillery.
A Cambodian defence ministry statement released Monday "welcomed the discussion at front-line commander levels to build up confidence to reach the cease-fire resolutely and effectively."
Posted by CAAI News Media at 12:37 am