via CAAI
Tuesday, 03 May 2011 15:01Post Staff
SEVEN years ago in 1994, a grand total of 45 buffaloes made their way to Svay Teab village in rural Cambodia courtesy of the Japanese. It was the same year the Rural Economic Development Association was established as an NGO and the start of a moving story of REDA’s work from care and counselling to tackling agricultural and drug problems and building a children’s orphanage.
In this article JUNE VINCENT, a volunteer management advisor with REDA, writes of the years and the work of the NGO since its inception, from helping to improve family living standards and addressing poverty and food shortages, to the battle with the HIV epidemic, the building of infrastructure, skills training and the provision of an orphanage in a struggling rural community centre. 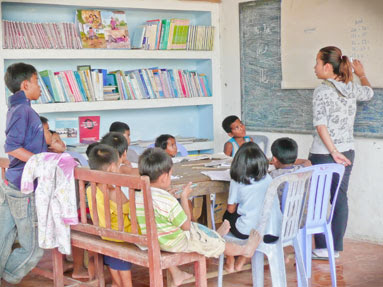 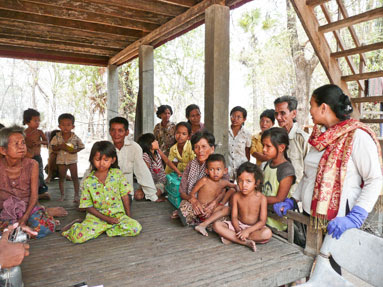 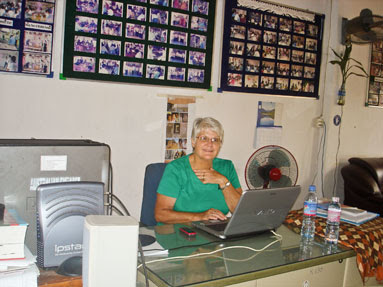 AFTER the Khmer Rouge regime, followed by occupation by Vietnamese forces, rural families in Cambodia had very little in the way of income that could enable them to support their families. Families were repatriated from the Thai border refugee camps in 1993 and those who had fled to Vietnam returned to their home districts in many cases with nothing but the clothes they wore and what they were able to carry. Land titles had not been re-established and people were living with few of life's basic necessities and they didn't even have enough food.
The Rural Economic Development Association, better known as REDA, is an NGO that was established in 1994. A small group of people who were repatriated to Svay Rieng in 1993 could see that there was serious hardship in the rural communities where they were living and they were keen to help the people improve their living standards. Added to this the HIV epidemic was rapidly taking hold in Cambodian communities.
The founders of REDA decided that in order to help these families they needed to undertake some positive action, as quickly as possible, not an easy task in those difficult days.
The first assistance received was in 1994 from a Japanese NGO, Japan Lay Missionary Movement (JLMM), who donated 45 buffaloes for 45 families in the Svay Teab district in Svay Rieng Province. At that time REDA had three staff who worked for no salaries for three years during which time they assessed which families had the highest level of need and who should receive a buffalo. Two of these original staff still work at REDA. After three years the buffaloes were handed over to the families and their community for future use and breeding.
In 1995 the World Food Program (WFP) began distribution of food for work in Svay Rieng province. Workers manually dug tracks for roads and in return received rice and cooking oil. There were 2000 families supported in this manner. Today the WFP still supports a total of 470 very poor PLHIV and Orphan and Vulnerable Children (OVC) families every month in Svay Rieng Province.
It was quickly becoming apparent that there was an urgent need for education about HIV and prevention activities as the rate of incidence was spiralling rapidly. Meanwhile western societies were also coming to grips with HIV and advances were being made medically in managing HIV once a person became infected.
In 1996 a new network of NGOs was established to fight this epidemic as a project of the International HIV/Aids Alliance and was registered as a local NGO in 2000. This organisation, called Khmer HIV/Aids NGO Alliance (KHANA) has operated as a linking organisation between the International HIV/Aids Alliance and local Cambodian NGOS.
The Royal Government of Cambodia, Khana and its partners such as REDA have made huge inroads into halting the spread of HIV from an estimated high of 3% in 1998 to 0.5% at the end of 2009, with approximately 63,000 people living with HIV (PLHIV) in Cambodia today.
REDA sought funds to be able to support those who had become infected with the HIV virus. With financial support through Khana and Family Planning International New Zealand, they provided a care and support system to enable their clients to stay well at home and try to begin to generate some income through the provision of vocational training, such as sewing, small engine repairs, agriculture and small business enterprises. REDA staff built fish tanks in 2000 and fish and frogs were imported from Thailand to begin a fish and frog farming program where the villagers could learn how to have their own fish ponds and maintain a healthy fish farm and improve the quality of their diet.
In 2005 visitors from the Social Fund arrived at REDA to see the staff providing training under a tree in the REDA compound and agreed to fund new buildings to include offices and training rooms.
It was never the intention of the REDA management to have an on-site orphanage, but in 2005 a family of three children were brought by their grandparents to live at REDA as they were unable to provide the care a growing family required because of their age and infirmity. One child was very sick with HIV and needed medicine and constant care and supervision.
Starting with the arrival of these children, an informal orphanage developed over the following years to the stage where it required registration with the Ministry of Social Affairs, Veterans and Youth Rehabilitation and full-time care givers, a teacher and a cook. Also some suitable child-friendly accommodation was required and although this is not fully resolved as yet, a grant in 2005 from the NZ Embassy in Bangkok provided a kitchen and dining/school room.
REDA continues to seek suitable donor support for the children as families that have asked REDA to care for their children have made it clear that they prefer them to stay close by within the province so that family kinship and contact is maintained.
Training in agricultural skills has been a priority for REDA as it became aware that many of the skills needed to develop alternative food sources had been lost. The PLHIV who are part of REDA's Integrated Care and Prevention (ICP) have been invited to receive training in these skills, along with women who are of household heads, poor families and where possible family groups are included.
Like many NGOs in Cambodia, REDA struggles to maintain financial viability and is very dependant on donor support. Without this support the lives of the rural poor would remain very bleak and difficult, with high infant mortality and maternal death rates, increases in HIV and TB cases, poor educational attainment especially in girls and other associated issues that go hand in hand with poverty, persistent hunger and a poor diet.
REDA directors, management and staff are highly appreciative of donor assistance that helps those families who are still struggling today.
Posted by CAAI News Media at 11:50 pm