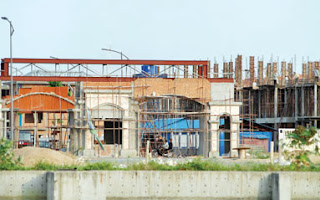 A motorbike drives past a construction site on Diamond Island yesterday, as government approvals soared in the first quarter. Photo by: Pha Lina
http://www.phnompenhpost.com/


via CAAI
Monday, 02 May 2011 15:01Soeun Say
CONSTRUCTION starts approved by the government more than doubled in the first quarter of 2011 compared year on year, according to figures from the Ministry of Land Management, Urban Planning and Construction.
Construction projects worth US$324 million were given the green light in the first three months to the end of March, compared with projects worth $159 million in the same period of 2010, the figures show.
Department of Construction Director Lao Tip Seiha said the increase came as a result of the ministry’s efforts to make it easier to do business in the sector.
“In three months of this year, we saw an increase in construction investors coming to ask for licenses,” he said, adding the same period last year had been “so quiet”.
Lao Tip Seiha said a number of large developments were approved, including a Koh Kong province hydropower plant, garment and textile factories, hotels and gas stations.
He also pointed to large several housing developments receiving approval during the period, including a New World project consisting of 1,440 houses in Sen Sok district, a 320-house Camko City project in Russey Keo district, and another phase of development on Diamond Island
“We are very happy to see value construction increase and we hope that it will continue increasing for the first half of this year,” Lao Tip Seiha said. “We had fewer projects than last year, but we received a lot of requests for large-size construction developments.”
Industry insiders said their businesses had also seen large growth in the beginning of the year, though some claimed the size of the increase had been unexpected.
Cambodia Properties Limited Managing Director Cheng Kheng said that foreign investors were returning to invest in Cambodia.
“Transactions of large property developments are improving in the outskirt areas [of Phnom Penh],” he said, calling the increase a “surprise”.
“My business is running much better. It has increased 100 percent in the first three months of the year compared to the same period last year,” he said.
CPL claims to have closed deals with investors from Vietnam, Philippines, Malaysia, and in particular, South Korea.
CB Richard Ellis Cambodia Country Manager Daniel Parkes said that 2010 probably represented the property market’s bottom, adding the large increase in the first quarter was partly attributable to the drop in the previous year.
“Certainly, as an indication of general market activity, we have seen an up-tick and despite challenges to the global economy Cambodia has potential for sustained growth,” he wrote.
“We have seen more investment in public sector projects, and the private sector will follow where the government leads in terms of intelligent investment in infrastructure and public works projects.”
Some experts expressed caution against placing too much stock in approval figures.
Leopard Capital Managing Director Douglas Clayton said yesterday that planning permissions were only a crude indication of property trends, and not as convincing as construction activity, unit sales or occupancy rates.
"I think the property market remains fairly subdued in Phnom Penh," he said.
Previous figures from the Ministry of Land Management, Urban Planning and Construction showed that 2,149 construction projects worth a combined US$840 million were approved during 2010. That compared to 2,230 projects worth $1.988 billion approved back in 2009.
Posted by CAAI News Media at 12:14 am