via CAAI
BANGKOK (Reuters) - Thai Prime Minister Abhisit Vejjajiva said on Monday he wanted to dissolve parliament this week, as planned, but he declined to be drawn on an election date despite a report the vote would probably be on June 26.
The Constitutional Court threw some doubt on the timeframe for an election, that it is hoped will end years of polarized politics that has led to outbreaks of violence, by delaying a decision on the legality of new electoral laws.
02 May 2011 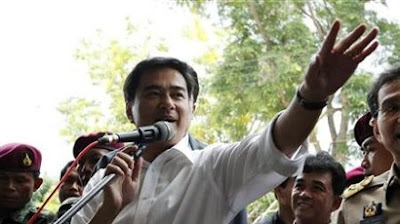 Thailand's Prime Minister Abhisit Vejjajiva talks with Thais evacuated from their villages at a makeshift camp in Surin province, 30 km (19 miles) from the Thai-Cambodian border, April 27, 2011, following armed clashes on a disputed border area between Cambodia and Thailand. REUTERS/Sukree Sukplang
The poll will be his first test of support after his coalition government came to power in late 2008 in a parliamentary vote the opposition said was arranged by the military, which intensified a political crisis.
Pressed by reporters, Abhisit said parliament would be dissolved before May 7, when he is scheduled to join a summit of Southeast Asian leaders in Indonesia. He has been saying since March that he would dissolve the house by the first week of May.
Asked about talk that he would submit the dissolution bill on May 4 for royal endorsement, he replied: "When it comes, you'll know about it."
"However, we have to wait for the process with the Constitutional Court to be done and there are other administrative processes to finish."
The Constitutional Court said in a statement it had given the prime minister, the speaker of parliament and the Electoral Commission until Friday, May 6, to present more opinions, and it did not comment on the legality of the laws.
That throws some doubt on whether parliament will in fact be dissolved this week.
A source at the court said it may rule on May 9.
An election has to be held on a Sunday, 45 to 60 days after parliament is dissolved. If the king approves dissolution this week, the vote could be on June 19, June 26 or July 3. Those dates would still hold if dissolution was only delayed a few days.
The Bangkok Post reported on Monday that Abhisit recently met the Election Commission. "It was tentatively agreed that the election will be on June 26," the daily said.
The stakes in the coming election are higher than at any time since a bloodless 2006 coup removed former Prime Minister Thaksin Shinawatra from power.
That plunged Thailand deeper into political crisis broadly pitting Thaksin and his many rural and urban poor supporters against the establishment elite, and those who view the former leader as a corrupt autocrat.
Abhisit has to call an election by the end of 2011 so a poll in June or July would be a few months earlier than necessary.
It could be an opportunity to heal political divisions but some analysts fear it could push Thailand back to the brink of chaos after violent protests last year in which 91 people died.
(Reporting by Khettiya Jittapong and Chatrudee Kittisuksatit; Writing by Ambika Ahuja and Alan Raybould; Editing by Robert Birsel)
Posted by CAAI News Media at 7:42 am