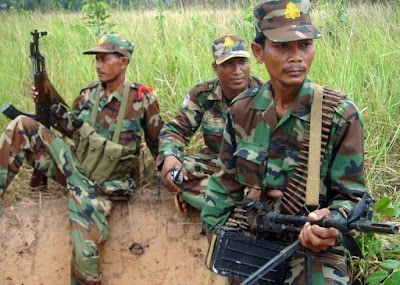 via CAAI
(AFP)
BANGKOK — Thousands of civilians who fled the deadliest fighting in decades on the Thai-Cambodian border have returned home as tensions ease on the disputed frontier, officials said Monday.
Although sporadic skirmishes continued, the situation had improved enough for many of the 85,000 people who authorities said sought refuge in temporary camps or temples on both sides to return to their villages.
"People started returning home after the authorities analysed the situation and established there is not likely to be any problem," said Thai Prime Minister Abhisit Vejjajiva.
"The military will monitor the border. We will remain very careful," he added.
In northeast Thailand, evacuation centres along the border were reported to have begun closing as civilians headed home following more than a week of cross-border artillery shelling.
In Cambodia, the deputy president of the National Committee for Disaster Management, Nhim Vanda, said more and more evacuees on that side of the frontier were also returning to their villages.
"The situation is good now. People are less worried."
The neighbours have come under increasing international pressure to end the violence, which has left 17 people dead since April 22.
An attempted truce announced on Thursday after military-level negotiations proved short-lived, but the fighting has since subsided and appears to be confined to a smaller area away from areas populated by civilians.
Ties between the neighbours have been strained since the 900-year-old temple Preah Vihear was granted UN World Heritage status in July 2008.
The World Court ruled in 1962 that the temple belonged to Cambodia, but both countries claim ownership of a 4.6-square-kilometre (1.8-square-mile) surrounding area.
On Friday Cambodia said it had asked the World Court to clarify that ruling.
The most recent deadly clashes have been mainly centred around two temple complexes about 150 kilometres (90 miles) west of Preah Vihear.
Seven Thai troops and nine Cambodian soldiers have died in the exchanges of artillery shells, grenades and small arms fire. Bangkok has said a Thai civilian was also killed and some homes were damaged on both sides.
Posted by CAAI News Media at 7:52 am