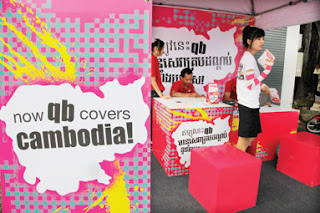 Photo by: Heng Chivoan
Employees of mobile service provider qb man a promotional tent on Sothearos Boulevard in Phnom Penh yesterday. qb has just announced its launch of a 2G mobile network in the Kingdom.
http://www.phnompenhpost.com/


via CAAI
Tuesday, 03 May 2011 15:02Tom Brennan
Service provider qb has launched a second-generation mobile network in Cambodia, according to Chief Executive Officer Alan Sinfield.
The firm has operated a 3G network since its startup in 2008, but its new 2G service now provides qb with nationwide coverage, he said yesterday.
Sinfield declined to discuss the launch in detail yesterday, pending a formal announcement later in the week. The firm is currently running a number of promotions to attract a variety of new customers, he said, and he wanted to measure their impact before discussing the 2G initiative.
Yesterday, Marc Einstein, an Asia Pacific telecommunications analyst at Frost & Sullivan based in Japan, who follows the Cambodian market, said qb’s attempt to leapfrog 2G service by launching with 3G had met with some difficulty, as 3G services were too expensive for the bulk of Cambodians.
He noted the level of competition in the Kingdom, calling it “the most saturated [telecoms] market in the world.“
A Ministry of Posts and Telecommunications presentation from January this year listed qb’s owner Cadcomms as a holder of a 3G licence only.
Following January’s merger between Smart Mobile and Star-Cell, five Cambodian GSM operators hold licences to provide both 3G and 2G service, while Beeline does not hold a 3G licence, the presentation showed.
Beeline General Director Gael Campan did not return request for comment yesterday. In March, Campan wrote that Beeline operates its EDGE technology at speeds that were better than many 3G+ operators in the domestic market.
Vimpelcom – the owner of Beeline – is looking to “beef up their market share” in Southeast Asia, Einstein said yesterday.
In March, Amsterdam-headquartered Vimpelcom completed its purchase of a 78 percent stake in Laos’ Millicom Lao Company for US$88 million, and last month announced financing of up to $500 million for its Vietnam joint venture, GTEL-Mobile.
Posted by CAAI News Media at 11:55 pm