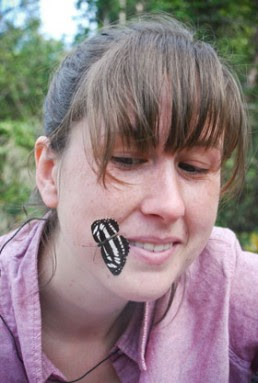 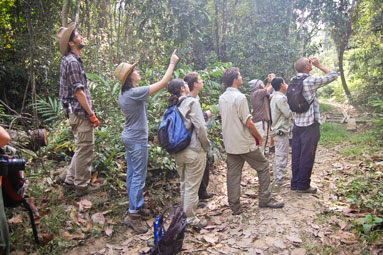 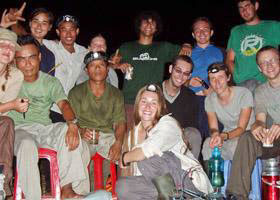 
via CAAI
Tuesday, 03 May 2011 15:00 Charles Amery
THE need for volunteers in Cambodia is always a continuing and pressing one for many NGOs, local and international, who work nationwide on many hundreds of projects aimed at all areas of the social, educational and environmental fabric and development structure within the Kingdom.
They come from all parts of the world, a band of international travelling volunteers of varying ages, skills, backgrounds and education and work on projects throughout the nation from Phnom Penh into the rural depths of a country where help is needed at every level of society.
Frontier Cambodia is one international NGO that offers its volunteers a rich experience seeing and researching the amazing biodiversity of the Cambodian forests and interacting with the communities that live within them.
Frontier is currently working in collaboration with institutions in five countries across four continents with Frontier-Cambodia collaboration between the Society for Environmental Exploration (UK) and the Department of Nature Conservation and Protection within the Ministry for the Environment, Phnom Penh.
Last month (April) two more volunteers arrived supporting their research during the current phase of their project while in the previous phase, 11 took part. They back up four staff working in country, two of whom will be in Cambodia for the rest of the year.
At the request of the Ministry of Environment, they are working on a Biodiversity Survey and Training Project in a community forest in the province of Oddar Meanchey.
The project has been implemented by the Frontier-Cambodia Tropical Forest Research Programme, collaboration between the Society for Environmental Exploration (UK) and the Department for Nature Conservation and Protection, Ministry of Environment in Cambodia.
Oddar Meanchey is a protected forested area rich in all variety of reptiles, amphibians, birds, insects and many species of relatively unknown and extremely elusive mammals.
“Our main focus for the forest project, presently located in Oddar Meanchey, is to obtain a wide variety of data relating to biodiversity levels, obtaining data on species abundance, measuring forest clearance within the vicinity of our camp and conducting night-time surveys and other areas of interest,” said Country Co-ordinator for Frontier-Cambodia Aaron Sexton.
“We have also conducted a series of community surveys to discuss environmental issues with the local people and to source information regarding endangered species that are thought to be present in the area. Our ability to conduct these surveys is aided by the local rangers that are employed through the Ministry of Environment and the rapport we have built up with the forest communities that are situated around the camp.”
Frontier works closely with many institutions both overseas and in the UK. Their conservation programmes are a partnership with local, national and international conservation agencies, NGO’s, governments, universities and communities.
They currently have overseas offices and operations in Cambodia, Fiji, Madagascar, Tanzania and Costa Rica.
Frontier believes wildlife conservation in Cambodia is in its infancy and that an increasing human population and demands of a growing economy threaten the country’s natural resources and the resulting environmental problems urgently need to be tackled.
They say that with many of Cambodia’s remaining forests remote and mostly unexplored, large, relatively intact, and often with linking corridors the potential for conservation of native fauna, particularly wide-ranging species, becomes that much more achievable.
Researchers and conservation workers, says Frontier, are becoming more prevalent in Cambodia and increasing efforts in the country as the wealth of wildlife indigenous to the Kingdom offers a new frontier in which to explore and help conserve.
And Frontier’s volunteers are never ones to shirk a challenge and a responsibility for with their major work currently in the disputed border area where fighting has seen several deaths of the military over the past two weeks, they have never stopped work during the ongoing Thai-Cambodia feud.
“ Contact between the two parties, the field researchers and myself in Phnom Penh, is a very regular occurrence to ensure that each party is fully aware of the ongoing situation, “ said Aaron Sexton.
“We also have locally sourced rangers within our camp who monitor the situation through listening to the local radio stations for news updates and also have the ability to be contacted if the fighting or shelling encroaches into the region we work.
“The team of staff, volunteers and rangers are safe and well and if there is any suggestion that the fighting flares up or extends beyond its current remit then a conscious decision will obviously be necessary to evacuate or relocate.”
Posted by CAAI News Media at 11:47 pm