Aids killed their parents but these sisters in Cambodia fight on 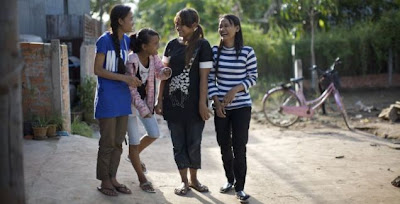 
Sisters are doing it for themselves – in defiance of double tragedy, neighbours’ sneers and the burden of having to grow up far too quickly.

These four girls – the youngest 14, the eldest 20, although still child-like – have endured almost a decade without their parents.

Both mother and father died after being infected with HIV, leaving behind yet another family in Cam-bodia orphaned by Aids.

Some 15million people across the world have lost at least one parent to the disease and UNAIDS, the joint UN programme on HIV/Aids, has warned that number could rise to 25million in the next few years.

But you may not imagine the struggles and anxieties of the Chan sisters just from watching as they giggle or conspiratorially whisper together.

Their sparse, concrete single room in the Phnom Penh village of Doeumchan is kept as house-proud as the few possessions allow – a rusting kettle, a hardboard bed, a few tea towels and carrier bags.

They have had to fend for themselves since 2001, when father Mai Saisayana died – two years after his wife, Rea Sothy. But they all have ambitions beyond just getting by.

Eldest girl Leakana is studying accountancy while working for a charity, where she has been joined by 17-year-old Sopheap. Sokchea, 18, is about to sit her final school exams. Sreyleak, 14, is being funded through school by an aid agency called Halo, which is backed by Tearfund.

But their parents’ deaths overshadowed their childhoods and forced them to become self-sufficient wage-earners earlier than imagined.

‘We’ve been very lonely, as well as it being difficult for us to make a living and finance our studies,’ Leakana admitted. 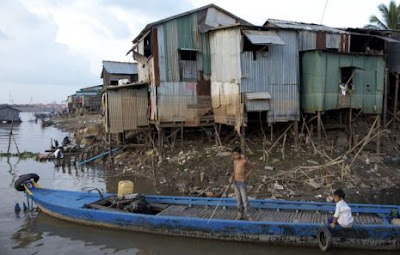 Adding insult to injury, neighbours are unsympathetic and abusive. Prejudice seems to thrive against families afflicted and affected by Aids.

‘When friends do come over, and there are guys in the group, our neighbours misjudge what’s going on and throw more accusations against us,’ Leakana said.

Sokchea said: ‘There are others who just deliberately ignore us but give us horrible and suspicious looks.’ Cambodia has up to 84,000 people thought to be living with HIV and an infection rate of 0.9 per cent – down from 130,000 and 1.2 per cent respectively six years ago.

Leakana imagines completing her accountancy exams and getting a good job to support a marriage and children of her own.

But she noted: ‘Of course I feel very alone at the moment – especially when I look at other families where healthy parents are taking care of their kids.

‘We’ve all just grown, hoping to strengthen each and everyone of us who survive.’