Deputy PM Suthep: Thai-Cambodian border will not be closed 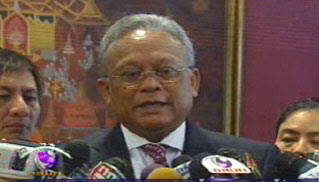 
BANGKOK, Dec 1 (TNA) - Thailand's Deputy Prime Minister Suthep Thaugsuban on Tuesday reasserted that the Thai government will not close the Thai-Cambodian border as it has concerns for the well-being of the population living along the border.

Mr Hun Sen was quoted by foreign media as saying his country will "have no happiness" if Mr Abhisit and Thai Foreign Minister Kasit Piromya are still in power, and that "Abhisit is the PM who is hardest to work with" among the ten Thai premiers he had worked with.

Mr Suthep said that the Thai government must remain resolute and careful, while not being preoccupied with Mr Hun Sen's words, as he might have been pressed by domestic or external factors in speaking as he did.

"The prime minister has been careful to his utmost in handling the matter," said Mr Suthep. "I pledge that the border will not be closed as the Thai government will not do anything that will adversely affect the people living along the border."

The deputy premier added that Thailand has yet to consider restoring diplomatic ties with Cambodia to their normal level, but is now trying to resolve the problem at all levels.

Mr Suthep also reminded that the diplomatic row between Thailand and Cambodia flared up right after the visit to Phnom Penh of former Thai premier Gen. Chavalit Yongchaiyudh and the appointment of ousted Thai premier Thaksin Shinawatra as economic adviser to the Cambodian government.

Prime Minister Abhisit has continued to emphasise that political and diplomatic retaliation is another matter, and the commitment made by the two countries which are beneficial to their citizens, particularly aid projects, will not be revoked, Mr Suthep said, referring to the agreement under which Bangkok will make a Bt1.4-billion (US$41.2 million) loan to upgrade a highway from the Thai border and other loans.

Regarding unconfirmed reports regarding a deal with Cambodia to release detained Thai engineer Siwarak Chutipong in exchange for reinstating the Thai ambassador to Phnom Penh, Mr Suthep denied that.

However he said the Abhisit government is continuing its duty to help the detainee, while the negotiations to restore diplomatic ties between the two countries must be carried out. (TNA)