Youths riding the sea of change 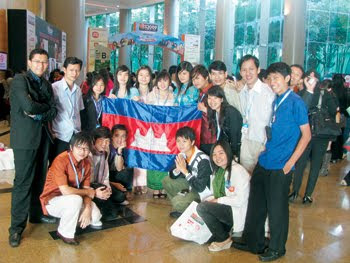 Students from the Asia-Pacific region at YES2009 Summit exchanged ideas and campaigns and engaged in discourse on cultural attitudes and political beliefs.

This year’s Youth Engagement Summit, or YES2009, is a gathering of Southeast Asian youths with well-known global icons of change. The summit’s goals, dubbed South East Asia Change, or Seachange, are to create a lasting community of youths in the region who are willing and able to work to bring positive changes to their lives and their communities.

The summit brought together youths of varying backgrounds and nationalities. Held November 16-17 at the Putrajaya International Convention Centre, the sessions saw demands for change in the future of Asia’s youths and hunger for growth in education for youths of all ages.

In addition to bringing this youth community together, the summit produced the Seachange survey on what today’s Southeast Asian youth would like to help accomplish, the results of which will be presented to the United Nations and international NGOs.

According to organising chairman Harmandar Singh, YES2009 drew “incitement power” from US President Barack Obama, for his message of hope.

The conference brought several influential people to speak, together with 500 delegates who recieved free air travel and accomodation. The speeches were also streamed live to universities across the globe including Harvard and Cambridge, with a Seachange Report at the end presented to world leaders.

Unprecedented reserves of knowledge and the quest for untapped potential was a key focus for the 19 youth representatives of Cambodia. It was rewarding to have diverse nationalities and races sowing unity in the summits – the youth ambassadors included those from Cambodia, Malaysia, the Philippines, Brunei, Thailand, Myanmar, Laos, Indonesia, Vietnam and Singapore.

The session started with a celebratory speech by the founder of Twitter, Bis Stone. He presented his wisdom with the remark, “Double down your mistake, and recognise the rewards among them.”

As a creative entrepreneur of technology, Stone was enthusiastic in sharing tribulations he had encountered in his career.

A thematic cornerstone of the conference was humanities and global empathy.

The session was vivid and engaging, being led by the founder of Live Aid, Sir Bob Geldof.

He is recognised as the premier British rock ’n’ roll star to have realised and achieved the altruistic intentions of Live Aid responding to crisis and poverty in Africa.

The spirit and flesh must be willing, Geldolf said. “Whatever you can do, bold it as your genius”.

The conference further featured the chief executive officer of Air Asia, Tony Fernades. He used a humorous anecdote and shared how he had deftly handled the challenges of exploration of Air Asia for Asia-Pacific.

He stressed to all the youth that in order to handle their dreams, they had the abilities to make them happen with the power of their awareness and their beliefs.

Reality-show tycoon Donald Trump shared, “The ingredient of success is never appeared to change, but it is always your adoration of yourself – your success will never work without individual commitment and keeping and staying focused is the way to success.”

The summit taught those who attended the importance of unity and diversity in Southeast Asia. The speakers urged all youths to continue striving for change in their very community, in their country, and most importantly within themselves.

All youths from every corner of the ASEAN region and everyone around the world, must change first.

It is always fascinating to see how the young adults discover and realise the reality of their dreams through the format of changes. It inspires in youths the great paths and traits that we can follow, discover and learn from.

The most important element of YES2009 was the power of innovation and creative mindsets – imploring youths to realise how fundamental change is to the achievements and aspirations of youths.