Korsang advocate up for award 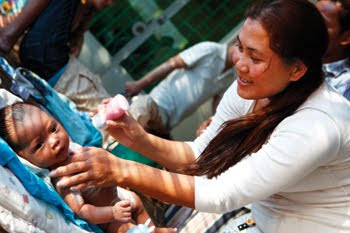 Chen Reaksmey, assists an overwhelmed mother in caring for her baby as part of her work with the women’s programme with the harm-reduction NGO Korsang on Tuesday.

Former beer girl who works to prevent HIV/AIDS among vulnerable women nominated by US state department for International Woman of Courage Award.

Chen Reaksmey looked on in horror as someone she had known died.

Hired as a peer educator by the harm-reduction NGO Korsang in 2007, Chen Reaksmey had no plans to quit using the drugs that she thought numbed her pain for so long.

But when she saw the man – a former client at Korsang’s outreach centre, just like her – overdose, she knew something had to change.

“I didn’t think I’d be able to stop,” Chen Reaksmey, 28, recalled in an interview Tuesday. “That’s when I knew I had to quit.”

Since then, she’s been hired full time at the NGO. Last year, she started the group’s women’s programme, which she now supervises. This week, she learned she would be the US embassy in Phnom Penh’s nomination for the 2010 International Woman of Courage Award.

“This year, Reaksmey stood out from the crowd due to her recent accomplishments, valour and the critical role she plays in bringing vital information, hope and dignity to an often neglected group within Cambodian society,” an embassy statement announcing the nomination stated.

Just a few years ago, it might have seemed an unlikely honour.

Chen Reaksmey came to Phnom Penh as a 15-year-old from her home in Battambang province to find work to support her impoverished family.

With little education and few skills, however, she found herself in the informal sex industry, working as a beer girl in a karaoke parlour.

She became pregnant, and then she stumbled into drug addiction.

“So many of my friends using drugs ended up dying from overdoses,” she said. “I didn’t want that to happen to me.”

She found hope, however, when she met Korsang’s outreach workers. A few months later, she decided it would be her mission to spread what she had learned about HIV/AIDS prevention to other girls still working in the bars.

For now, Chen Reaksmey hopes to use her award nomination as a message to government, police and local communities.

“Drug users are victims,” she said. “They don’t want to use drugs. They are victims, not criminals.”

Winners of the 2010 International Woman of Courage Award are expected to be announced next year.

This year, eight nominees were chosen out of a list of 80, from former child slaves to lawyers and NGO directors.