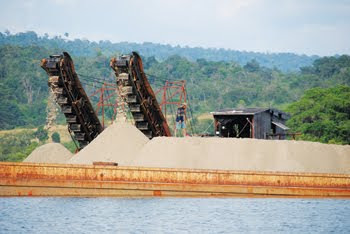 A vessel dredges sand in estuaries upstream from Koh Kong town last month, part of an operation that local villagers say has led to sharp dropoffs in fish catches.

MORE than 100 fishermen descended on Koh Kong provincial hall on Monday to protest a large-scale sand-dredging operation they say has jeopardised the livelihoods of as many as 2,000 families in the region.

Rain Many, 40, who has fished around Koh Kong for about 20 years, said fish catches had dropped off steeply since the dredging operations began about a year ago.

“The villagers have always depended on fishing, but now we can’t find saltwater fish anymore because some of the fish are poisonous and some have migrated to other areas,” he said Tuesday.

Kon Sanem, 35, said the fall in income had forced her to mortgage her house in order to support her children.

“I want to cry right now because my standard of living has dropped; I don’t have enough income to send money to my two children studying in Phnom Penh,” she said.

Kon Sanem said that before the dredging operations started, she could earn around 50,000 riels each day, but that now she can only earn 10,000 riels, adding that vessels have been dredging at night “in secret”.

In March, the Post reported that Winton Enterprises, a Hong Kong-based firm, was removing thousands of tonnes of sand each week from coastal estuaries in Koh Kong. Reporters observed sand being extracted by dredging vessels in estuaries upstream from Koh Kong town and shipped offshore, where it was unloaded into an ocean-going bulk carrier for export to Singapore.

A report issued in February by anticorruption watchdog Global Witness estimated that around 60,000 tonnes were being mined for export each month, and that the annual value of the Koh Kong sand was around US$35 million.

Sanh Moniroath, director of the provincial Department of Water Resources, said he could not resolve the dispute because it was a matter for the governor and the companies involved in the dredging.

But Lim Savan, a cabinet official at Koh Kong provincial hall, said he had asked the fishermen to write a new letter to the local authorities so that the case could be investigated further.