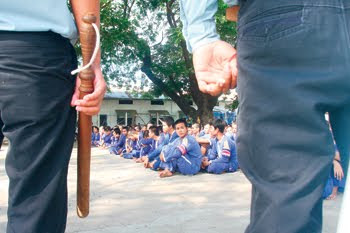 Guards watch over inmates at Prey Sar prison during an International Children’s Day celebration in June.

FOUR members of the UN Sub-Committee on the Prevention of Torture (SPT) began their first mission to Cambodia on Tuesday to assess the current situation in the country’s prison system and to prevent torture and ill-treatment.

In a statement released Tuesday, the UN’s Office of the High Commissioner for Human Rights (OHCHR) said the visit will take place until December 11, during which time experts will make unannounced visits to prisons, police stations and rehabilitation centres, as well as hold talks with key government officials.

Christophe Peschoux, the director of the OHCHR in Cambodia, said giving the mission access to the country’s prisons and detention centres was one of the two obligations laid down by the Optional Protocol to the UN Convention Against Torture, ratified by Cambodia in 2007.

“This is part of [the government’s] engagement, to allow the SPT to look into torture in prisons and detention centres and put in place mechanisms to prevent torture,” he said.

The other obligation under the protocol, Peschoux said, was the establishment of an independent national commission to monitor torture.

Rights groups said that despite clear improvements over the situation in the 1980s and 1990s, torture and mistreatment continue to be a blight on the Cambodian justice system.

“The systematic use of torture – particularly to extract forced confessions, information or bribes from detainees – is deeply entrenched in Cambodia’s criminal justice system,” said Sara Colm, a senior researcher for Human Rights Watch.

A report released in March by the rights group Licadho found 85 cases of torture in the 18 prisons monitored by the organisation in 2008, 78 of which had occurred in police custody prior to detention.

The report stated that the most common forms of torture reported to Licadho were “beatings with a wooden baton, electric baton, gun or other blunt objects, and kicking”.

Colm said that although monitoring by human rights advocates has reduced the incidence of torture, there is no systemic push to punish offenders on the part of the government.

“While it has been shown that the practice of torture decreases when human rights monitors, lawyers and medical workers have regular access to detention settings to monitor conditions and interview detainees, the fact that perpetrators are rarely punished for torture perpetuates the practice,” she added.

The lack of an avenue for legal recourse also prevents further reductions in the practice, she said.

Licadho Director Naly Pilorge added that the number of cases of prison and police torture is likely to be underreported, since prisoners often face retaliation for confiding in rights workers.

Many prisons have also normalised mistreatment by encouraging inmates to perform a variety of prison functions, she said, including meting out official punishments.

“Key abuses are done mostly within the prison cells by a hierarchy of prisoners,” she said, adding that social rehabilitation centres – including the Prey Speu and Koh Kor centres in Phnom Penh – have also played host to “severe” forms of sexual, physical and psychological abuse.

Prison officials admitted that abuses have occurred in the prison system in the past, but said recent reforms had taken significant steps towards reducing the practice.

“We did have some cases in which prisoners do torture each other, but after we allowed them to leave their cells to do exercise, grow vegetables and take part in short training courses, these cases have not happened,” said Heng Hak, director general of the Department of Prisons at the Ministry of Interior. He added that inmates’ standard of living has also improved since the government bolstered its daily food rations in June this year.

Thun Saray, president of local rights group Adhoc, said that despite undoubted improvements in the situation, the government still has a long way to go towards halting torture.

“Cambodia is a country that has ratified most conventions on human rights, but implementation is still weak,” he said.

Cambodia is the only country in Southeast Asia to have ratified the protocol.