Trans-Asian Railway at a halt due to Thaksin incident 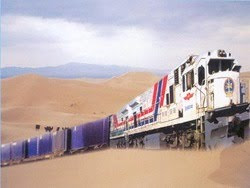 Ongoing hostilities between Cambodia and Thailand are believed to be jeopardising the completion of the Trans-Asian Railway.

The project, worth 15 billion dollars, could fail in an area which connects Kunming in southern China, to Singapore, through Sisophon, Cambodia, to Aranyaprathet, Thailand.

The full track, which runs along a path of 5300 kilometres could vanish if the diplomatic situation becomes deadlocked.

The line from Cambodia to Vietnam is the most important part of the project, representing a strategic point for the entire region.

There is no point in the link between Ho Chi Minh City and Phnom Penh, without connection with Thailand.

The Trans-Asian Railway is a project aimed at creating an integrated rail network for Europe and Asia to unite Istanbul with Singapore, following on to China.

The diplomatic wrangle between Phnom Penh and Bangkok flared up after the decision of Cambodian Prime Minister Hun Sen to take exiled Thai Prime Minister Thaksin Shinawatra into the country as a financial adviser.

Thaksin had been sentenced to two years prison in Thailand for corruption.

Since Thaksin's arrival in Cambodia, the two countries have withdrawn their respective ambassadors and a Thai citizen was arrested in Cambodia on charges of espionage.

your site is so good I always visit it everyday, you update so quick !