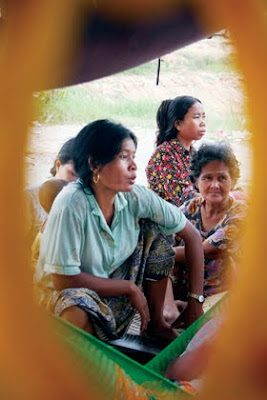 Families from the AIDS comunity at Tuol Sambo rest in the shade after their eviction from Borei Keila in Phnom Penh.

MANY GOVERNMENT OFFICIALS HAVE FAILED TO SEE THEIR OWN DOMESTIC NGOS AS A RESOURCE TO BE CONSULTED.


But many governments fail to make use of NGO experience, choosing to see them as threats rather than potential allies.


INTERNATIONAL experience has shown that nongovernmental organisations are critical to the fight against HIV/AIDS. But in practice, and despite the public promises of many world leaders, AIDS NGOs often face obstacles on the ground. In Cambodia, a proposed new law risks making it harder for these groups to do their work. NGOs need regulation, but not regulations so burdensome as to entangle them in bureaucracy and drive them underground – as is threatening to happen in other parts of Asia.

Cambodia faces a serious AIDS crisis. In 2003, the WHO estimated that there were 123,100 people living with HIV/AIDS in the Kingdom, of whom fewer than 13,000 are currently receiving treatment. Cambodia needs to urgently expand the impact of its efforts to combat the epidemic.

Why are NGOs so important? The answer has to do with some of the factors that make AIDS different from other epidemics. The AIDS virus spreads most quickly among people who are marginalised from mainstream society: drug users, sex workers, men who have sex with men, and the urban and rural poor. To reach these people with life-saving HIV prevention information and treatment, we need organisations run by and for people from those communities. Because some of those most at risk of contracting HIV are engaged in activities that are illegal, and because of the intense and life-destroying stigma that surrounds the epidemic, these people are not likely to come and take part in government outreach programmes. Small, frontline AIDS and harm-reduction NGOs that have the trust of these communities are often the smartest, if not the only, way to reach them.

This year, expressing concerns about global terrorism, the Cambodian government announced plans to pass a new NGO law. Prime Minister Hun Sen has called it one of three priority pieces of legislation, along with a new penal code and an anticorruption law. Unfortunately, the content of the law is unknown, and NGOs have not been consulted in the process of drafting it. Based on proposals that have circulated in the past, Cambodian NGO directors have expressed concerns that the new law will create restrictions on NGOs like those in other parts of Southeast Asia.

Until now, Cambodia has been one of the few countries in mainland Southeast Asia to boast a vibrant, healthy NGO sector, with 2,200 NGOs and associations. In Myanmar, Laos and China, where NGOs are heavily restricted, tighter government control has slowed the response to AIDS.

In China, where dozens of new grassroots NGOs have sprung up to work on HIV/AIDS in the past 10 years, restrictive laws have made it impossible for most to register as NGOs. Instead, they register as commercial enterprises, which means they must pay taxes and exist in a semi-legal shadowland. Chinese AIDS NGOs face close monitoring and harassment by the authorities, which only makes it more difficult for them to reach out to the public. AIDS activists Hu Jia and Wangdue are serving prison sentences for their activism. Rural petitioners demanding compensation for their infection with HIV through unsafe hospital blood transfusions are arrested and put in secret “black jails”. AIDS activists and doctors in China estimate that millions of people are living with HIV as a result of the country’s slowed response to the epidemic.

In Vietnam, due to restrictive laws, only government-approved “mass organisations” are permitted to register. Support groups of people living with HIV/AIDS cannot register, and therefore they are not able to get international funding. Drug users and sex workers cannot form NGOs at all, and therefore are unable to mobilise to reach out to those at greatest risk of HIV infection.

In Myanmar, probably the most restrictive country in the mainland, NGOs cannot register at all without the sponsorship of government agencies.

NGOs run without government approval cannot accept funds; their directors risk arrest. Recently, the Myanmar government announced that it would require all small, informal support groups of people living with HIV/AIDS to be supervised by government work teams – a measure that will certainly limit their growth. AIDS activist Than Naing is serving a life sentence for his activism. In part as a result of all these restrictions, the rate of HIV infection in Myanmar has skyrocketed.

In China, Vietnam and Myanmar, funds raised by NGOs may be channelled through government agencies that find ways to keep a significant portion for themselves – instead of passing it on to those who desperately need it. Censorship of Web sites and publications has made it difficult to reach the public with basic life-saving AIDS information.

Cambodia is home to a vibrant civil society sector and some leading AIDS and harm-reduction groups. NGOs in Cambodia that work on the ground can see up close the practices that are successful in combating AIDS and the policies that are unsuccessful. They have invaluable direct experience that can enrich policy and law. But many government officials have failed to see their own domestic NGOs as a resource to be consulted, instead seeing them as a potential threat. Cambodia can show leadership in Asia and reduce the spread of AIDS by fostering the growth of domestic civil society and by consulting Cambodian NGOs on the law that will govern them.