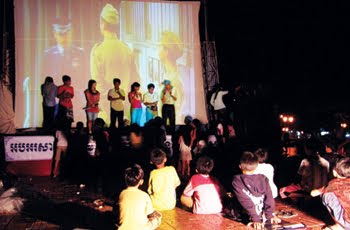 Amid the crowds at Wat Botum Park last weekend, attendees of the Science Film Festival struggled to make their roars of approval heard. Engulfed on three sides by aerobic armies and deafening sound systems, the festival cranked up its own volume to attract the Cambodian public.

Since November 17, the Goethe Institute-organised Festival has been reaching out to Cambodia’s youth using film to provide science education. Videos were screened at five universities and five high schools. Three days of viewings at Wat Botum Park marked the festival’s culmination and a chance for any passerby to watch its documentaries.

The Science Film Festival’s outdoor screenings were made possible by the Khmer Youth and Social Development organisation, underpinning the festival themes of science education advancement and student involvement in the sciences. Under the direction of KYSD Programme Coordinator Chhean Chan Heang, young volunteers met in Wat Botum Park to pass out festival posters and produce the event.

KYSD volunteers began rigging their outdoor cinema at sundown last Friday. Postponed for an hour due to technical difficulties, the first screening began at 7pm. The brightly animated French short quickly caught the eye of nearby children, and a crowd of curious onlookers developed.

“Darwin on the Evolution Trail” lasted 10 minutes and led viewers from Darwin’s work in the Galapagos to the eventual discovery of DNA. It was followed by full-length documentary “I Have Seen the Earth Change”, which explores evidence of global warming through the experience of Japanese rice farmers. All films shown at the festival were dubbed in Khmer.

The final evening of the festival presented films that had a personal theme and that struck close to home. “Children of the Flood” chronicled the global phenomenon of dramatically increased flooding. “Nourished by the Same River” – the only documentary with a Cambodian producer – presented the cultural scope and natural intensity of the Lancang-Mekong river.

Over the course of the festival, in schools as well as outdoors, KYSD volunteer Sum Kalyan noticed that students were most captivated by the amusing German short “Biogas”. It detailed the energy-producing capabilities of pig flatulence. Yet not everything ended in giggles. Students also loved the scientific comparisons of “Dog or Cat, who is smarter?” and seemed mesmerised by the 1961 space voyage of “Ham Astrochimp”.

“The children want to know about space,” Kalyan said, “because before they have only seen still pictures, never films.” Although they were taught scientific theory, many Cambodian students graduate high school without having performed scientific experiments.

Chan Heang said he was “not studying, but interested” in science. He quoted how important an awareness of scientific principles was for Cambodian citizens.

“We are a developing country; therefore, we have to be aware of science to improve Cambodia,” he said.