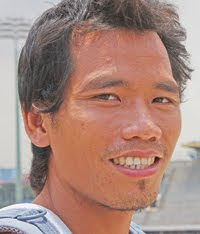 Photo by: Heng Chivoan
Hem Bunting is one of the strongest hopes for Cambodia at the SEA Games in Laos.

FIVE Cambodian track athletes, including one female, will be sent to the Southeast Asian Games that start next week in Vientiane.

Hem Bunting, Sean Sopheak, Khieu Samnang, Sar Choub Vesna and Sou Tit Linda make up the team. Stars Hem Bunting and Sean Sopheak are currently training in Vietnam, whereas the others do regular practice at the National Sports Complex.

Hem Bunting, silver medalist in the marathon and bronze medalist over 5,000 metres at the 2007 SEA Games in Thailand, carries the strongest medal hopes for the Kingdom. The 24-year-old has received private sponsorship from Rasmey Sokmongkol, general manager of East West Corporation Asia Ltd, and other local businesses.

For the upcoming event in Laos, Hem Bunting will compete in marathon and 5,000m race. In 2007, Bunting completed the marathon in 2 hours, 26 minutes and 28 seconds, less than three minutes behind gold medalist Yahuza Yahuza from Indonesia. At the Olympic Games in Beijing last year, Bunting recorded a time of 2 hrs 33min 32sec, finishing 73rd, and at the national championships this year he took first place in a time of 2hr 45min 51sec. It is hoped that training in Vietnam will allow him to improve his times.

Sean Sopheak will compete in the 5,000m and 10,000m races, the latter of which he set a time of 38min 43sec at the national championships.

Sar Choub Vesna will be competing over 100m, while Khieu Samnang will vie in long jump and other events yet to be confirmed. Sou Tit Linda, the only female, will race the 100m and 200m events.

National athletics coach Chay Kim San told to journalists that his students try hard and work hard, and he expects their records will improve in Laos.