Cambodia’s Diplomatic Note over Thai Repeated Aggressions
Phnom Penh, April 26, 2011 AKP –
The Ministry of Foreign Affairs and International Cooperation of the Kingdom of Cambodia sent today a diplomatic note to the Thai Embassy in Phnom Penh regarding further violation of Cambodian territorial integrity by Thailand’s armed forces, on Apr. 25 in the area of Ta Mone and Ta Krabei Temples.
The following is the full diplomatic note: 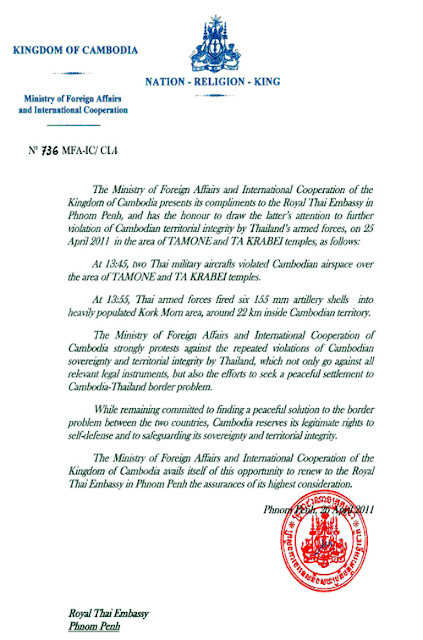 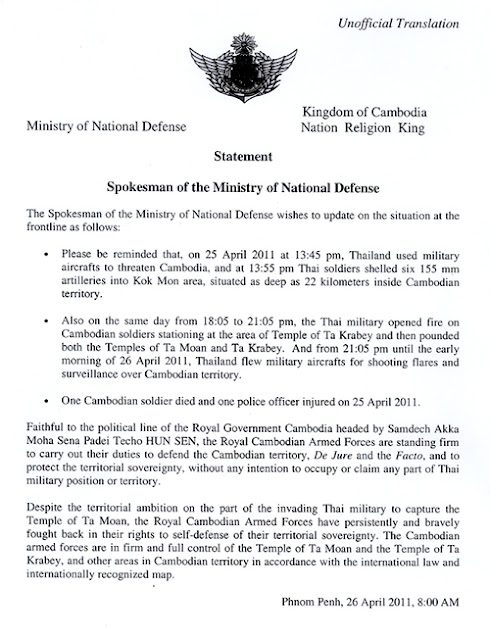 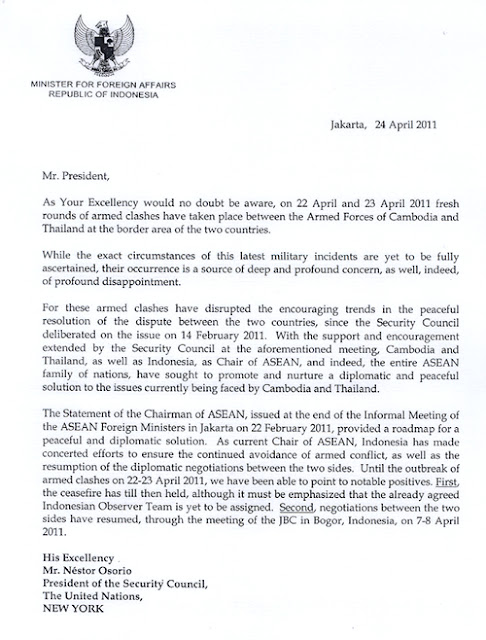 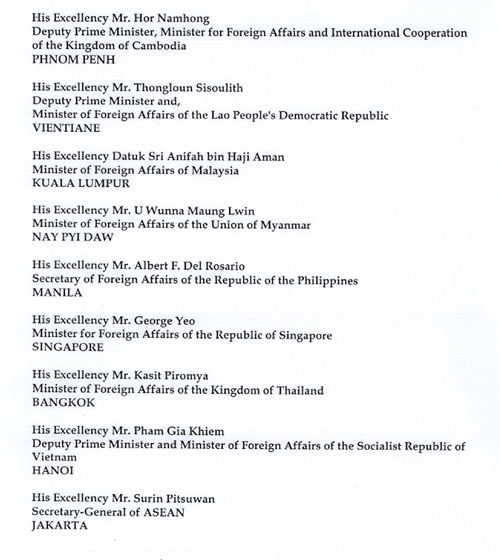 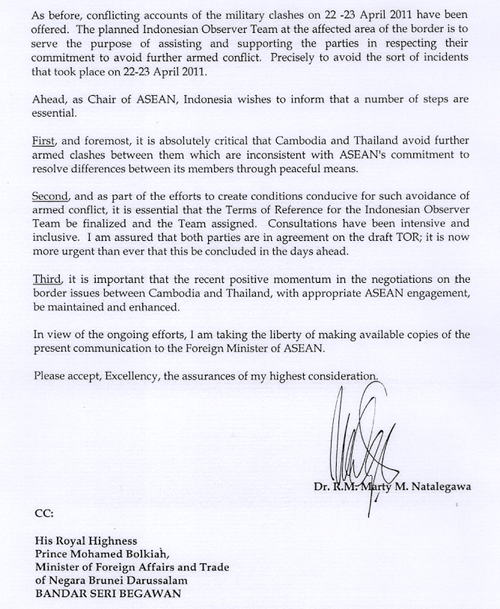 
Cambodian NA Delegation Returns Home
Phnom Penh, April 26, 2011 AKP –
A Cambodian high-ranking parliamentarian delegation led by Samdech Akka Moha Ponhea Chakrei Heng Samrin, President of the National Assembly, returned home on Sunday after attending the 124th Inter-Parliamentary Union (IPU) Assembly in Panama.
The delegation was welcomed at Phnom Penh International Airport by H.E. Nguon Nhel and H.E. Say Chhum, respectively first and second NA Vice Presidents and other NA officials.
Samdech Heng Samrin has delivered a speech at the opening ceremony of the assembly attended by 1,300 members of Parliament and observers from 150 countries around the world, said Ms. Lork Kheng, a member of the 8th NA Commission.
The 124th IPU Assembly particularly focused on peace and international security issues, including the monitoring and consolidation of parliament’s power, as well as the participation in the elections with a free and fair manner, and the punishment of those who commit violence acts during the elections.
Cambodia has been appointed to chair the ASEAN+3 group meeting for the 125th IPU Assembly scheduled to be held at the end of 2011 in Switzerland.
The Cambodian high-ranking NA parliamentarian delegation has visited the Panama Canal, a historic site and an important economic corridor of Panama. –AKP
Article in Khmer by PAL Song
Article in English by SOKMOM Nimul
______
Information Minister Urges for Responding to Problems in Localities with Journalists and Citizen
Phnom Penh, April 26, 2011 AKP –
Information Minister H.E. Khieu Kanharith urged the public officials to have accountability and get ready in 24-hour-clock to respond to all problems happening in the localities with journalists and citizen.
The minister made the comments, while presiding over a workshop on “Improvement Outreach, Public Relation and Information Strategies on Sub-National Level” held here on April 25, which was co-organized by the Ministry of Information, the Ministry of Interior and Konrad Adenauer-Stiftung.
The source information can be received from newspapers, radio, television, electronic media and those who are responsible for the news information, he said.
He also raised some issues relating to the democracy with the participation from the citizen, the political parties and the civil society, an access to the information and the freedom to get the information.
The seminar was attended by the Information officials and officials from the provinces and cities in the country. –AKP
By THOU Poeu
______
Vietnamese Journalists To Help Disseminate Cambodia’s Tourism Potential to Their Country
Phnom Penh, April 26, 2011 AKP –
Vietnamese journalists and some travel agencies pledged to help disseminate Cambodia’s tourism potential to their country.
The remarks have been made here recently by Mr. Tran Doan The Duy, Vice President of Vietravel and head of a Vietnamese delegation during the meeting with H.E. Sam Prumnea, Acting Minister of Tourism.
He added that this was the second time that Vietnamese journalists came to learn about Cambodia’s tourism potential.
In reply, H.E. Sam Prumnea briefed the Vietnamese reporters on the country’s tourism, saying that there were some 460,000 Vietnamese tourists among 2.5 million foreign visitors to Cambodia in 2010.
For the first two months of this year, Cambodia received around 520,000 foreign tourists including 80,000 Vietnamese, he said.
The acting tourism minister added that Cambodia is expected to attract some 2.8 million foreign visitors in 2011.
The 20-member group of Vietnamese journalists visited Cambodia from Apr. 21 to 25. –AKP
By LIM Nary
______
Cambodia Licenses a Private Company to Install a Telephone Network for Prisoners
Phnom Penh, April 26, 2011 AKP –
The General Department of Prisons of the Ministry of Interior has granted a private company to invest some US$8 million in installation telephone network for prisoners in the country.
The agreement was signed here yesterday by Mr. Phou Se Tong, Director General of TPL Holding Company and Mr. Kuy Bun Sorn, Director General of Interior Ministry’s General Department of Prisons.
The telephone network will be installed in order to facilitate the prisoners and their families to communicate each other under digital technology observation. –AKP
By KHAN Sophirom
______
Statement of Cambodia’s Ministry of National Defense over the Situation at the Frontline
Phnom Penh, April 26, 2011 AKP –
The following is the Statement of the Cambodian Ministry of National Defense over the situation at the frontline: 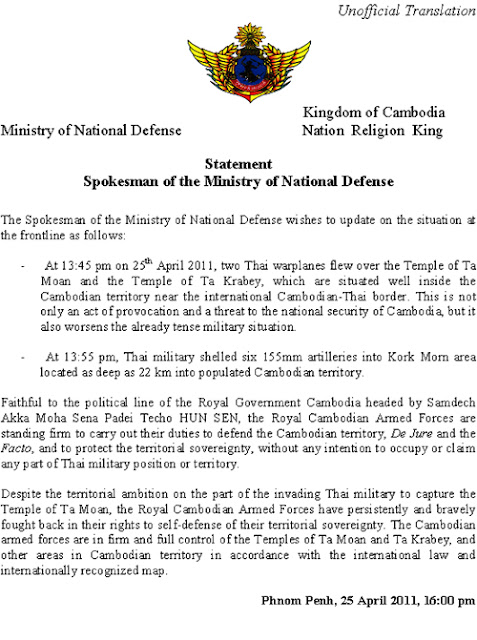 
The Ongoing Thai Invading Offensives Have Displaced Ten of Thousands of Cambodian Innocent People
Phnom Penh, April 26, 2011 AKP –
As of 25 April, 2011, Cambodian displaced people are flocking to the districts of Samrong and Banteay Ampil, Oddar Meanchey province, according to the Press and Quick Reaction Unit of the Office of the Council of Ministers.
They are fleeing in ten of thousands escaping the ongoing Thai act of aggression against both Cambodian military and civilian targets. Thai heavy artilleries have been pounding civilian villages as far as 20 km deep into Cambodian territory.
According to the latest official figure released by the Governor of Oddar Meanchey province at 12:00 pm today, the numbers of refuges are standing at 22,385 people scattering at various villages and public buildings. The number of displaced people is expected to increase in the coming hours and days as the unprovoked and premeditated attacks by Thai troops are still storming into the said Cambodian areas.
Those displaced people are being sheltered at various public buildings and villages in temporary camps provided by the Oddar Meanchey provincial authority, the National Committee for Disaster Management and Cambodian Red Cross. –AKP
______
U.S. Expresses Concern over Cambodia-Thailand Border Dispute
Phnom Penh, April 26, 2011 AKP –
“The United States remains deeply concerned about clashes between security forces along the Thailand-Cambodia border,” said on Monday U.S. Secretary of State Mrs. Hillary Clinton in a press statement.
“We strongly urge both sides to exercise restraint, refrain from provocative acts, and immediately take all necessary steps to reduce tensions and avoid further conflict. The loss of life, displacement of civilians, and damage to property is regrettable,” she said.
“We support the efforts of Indonesia in their role as chair of the Association of South East Asian Nations (ASEAN) to work with both countries to reach a resolution. The United States is also engaging with Thai and Cambodian officials directly on this matter. We continue to urge the Royal Thai Government and Royal Government of Cambodia to resolve their disputes peacefully to help strengthen regional stability,” stressed Mrs. Hillary Clinton. –AKP
______
DPM Sok An Calls for More Training of Boules Athletes
Phnom Penh, April 26, 2011 AKP –
Deputy Prime Minister Dr. Sok An, Minister in charge of the Office of the Council of Ministers, told officials of the Ministry of Education, Youth and Sports on Apr. 22 that Cambodia needs to improve training for its boules athletes to gain more medals in overseas matches.
Dr. Sok An, also President of the Federation of Boules of Cambodia, said Cambodian boules players have gained the largest numbers of medals of Cambodian athletes competing in international games. Cambodian boules athletes received 26 gold medals, 40 silver medals and 40 bronze medals since 1995, according to the Press and Quick Reaction Unit of the Council of Ministers.
“We are very proud of our athletes who won medals from boules matches,” Dr. Sok An told officials of the Ministry of Education, Youth and Sports, and four children who will join the first World Children Sports Games (WCSG) to be held in Ankara, Turkey, from Apr. 24 to 30, 2011.
Dr. Sok An said, “we must improve the training of our boules athletes to enable us to gain more medals. The ministry has built nine training centres nationwide so far.”
Thirty-four countries will send athletes to compete in the WCSG, said Cambodian sports officials. –AKP
______
U.S. Welcomes Investment Relations With Cambodia
Phnom Penh, April 26, 2011 AKP –
A U.S. Embassy’s officer in Phnom Penh welcomed the progress of investment relations between Cambodia and the U.S.
Mr. Mark L. Wening, Public Affair Officer at the U.S. Embassy in Phnom Penh said the U.S. is encouraged by the economic growth that Cambodia has achieved in the last several years and the appreciative support that the Royal Government of Cambodia has provided to foreign investment.
He said there are a number of American firms successfully operating in Cambodia already and many more who are considering this market because of the attractive investment climate, relatively low cost of labor, and Cambodia’s strategic location in the heart of ASEAN.
We are hopeful that, as the rule of law is further strengthened in Cambodia, more foreign investment will flow into the country to support economic growth, he said.
During the first quarter of the year, American investment in Cambodia is number one among the foreign investors with approximately US$94 million.
In January, there were two American investment companies. The first one was Tower Master Company limited with its 90 percent share, other 10 percent from domestic investor and Malaysia investor with total investment capital US$101,674,000, and another company in manufacturing US$3.6 million. –AKP
By KHAN Sophirom
Posted by CAAI News Media at 11:37 pm