via CAAI
Published: 25/04/2011
Online news: Asia
A fresh clash between Thai and Cambodian soldiers was reported on Monday morning, the fourth day running, but no casualties were reported.
Field reports said there was a clash about 10am around Ta Muen Thom temple near Ban Nong Khan Na in tambon Ta Miang of Surin's Phanom Dong Rak district.
The sounds of rifle, machinegun and mortar fire could be heard continually from the area. No more artillery shells landed on Thai soil.
The public relations centre of the 2nd Army's forward headquarters on Monday reported that five soldiers had been killed and 35 wounded since the fighting began on Friday. There were 25,000 civilian evacuees in Surin and 4,500 in Buri Ram.
2nd Army commander Tawatchai Samutsakhon said the Thai military's response to Cambodian attacks has been limited to military targets, unlike the Cambodian soldiers who fired 10 artillery rounds into Ban Nong Khan Na village in Phanom Dong Rak on Sunday.
A sporadic firefight involving small arms and mortars also occurred between Ta Kwai and Ta Muen Thom temples on Sunday night. lasting until about 11pm, he said.
National army chief Prayuth Chan-ocha said the government will decide whether or not to go to war with Cambodia over the disputed border, not the military.
The army was ready to follow the orders of the government. However, he believed there should be bilateral meetings, not a war, because people from both sides were being hurt by the conflict.
"If Cambodia doesn't want to negotiate, then it will not be necessary for us to negotiate either," the army chief said.
Thai troops sent to the border area had not retreated, and had retaliated in kind, Gen Prayuth said.
"The Foreign Ministry, the Defence Ministry and the Thai armed forces don't agree with having third-party observers in the disputed border area, but if it is required then there must be regulations to cover it and all troops from the two countries must move out of the area.
"I don't think there is any country that wants foreign troops to invade its territory, and it is not necessary to have third-party observers at this time," Gen Prayuth added.
Foreign Minister Kasit Piromya urged Surin residents fleeing border clashes to be patient, saying the government and his ministry are trying to end the fighting through negotiations.
Mr Kasit said the evacuees could expect to return home and resume their normal lives soon. The minister later handed over 50 sacks of rice to evacuees in Surin's Ban Khok Klang district and listened to their stories of problems and hardship.
Grandma Lae Suksawaeng, 75, of tambon Tamiang in Phanom Dong Rak district, said she wanted the fighting to end soon because she, like everyone else, wanted to return home. 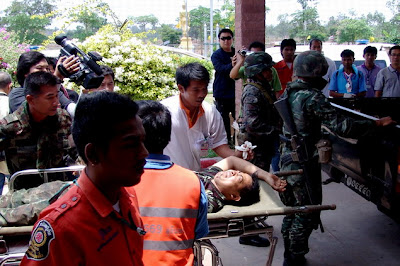 A soldier, who sustained a stomach wound in a fight with Cambodian troops this morning, is rushed to a local hospital.Photo by Nopparat Gingkaew. 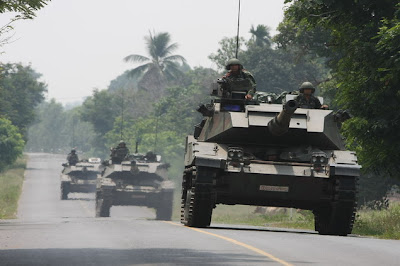 Thai troops deploy more tanks to reinforce their base near the Cambodian border in Buri Ram province.Photo by Tawatchai Kemgumnerd.
Though they were fully fed at the shelter, it was not as comfortable as being at home, she added
Mrs Nongnut Kraiphet, 65, from the same tambon, asked the minister why Cambodian troops had to fire into Thai territory and just why the two countries had to be engaged in conflict at all.
The fighting has seriously affected local residents, she said.
Mr Kasit denied speculation that the Asean chairman, Indonesian Foreign Minister Marty Natalegawa, might postpone his planned official visit to Thailand indefinitely due to the latest border clashes.
The Indonesian foreign minister had not cancelled his visit, just postponed it and is now studying details of the bilateral framework and the diplomatic immunity of his delegation during their border observation trip, he said.
Mr Kasit said he would meet Mr Natalegawa and Cambodian Foreign Minister Hor Namhong at a meeting on April 28.
Acting government spokesman Panitan Wattanayagorn announced in Bangkok this morning that the Asean chairman had postponed today's meeting with Thai and Cambodian officials to seek ways to end the continuing border conflict around Preah Vihear temple.
Mr Panitan said the Asean chairman wanted to further examine the details of the different treaties between the two countries.
Deputy Prime Minister in charge of security affairs Suthep Thaugsuban said he regularly discussed the situation along the Thai-Cambodian border with Gen Prayuth and Lt Gen Tawatchai.
"The army has the responsibility to protect Thailand's sovereignty.
"If Cambodian troops use heavy weapons, the Thai side will respond in kind.
"Prime Minister Abhisit Vejjajiva will not intervene in the army's strategic planning and I would like to assure the global community that Thailand is not using poison gas or warplanes to strike back at Cambodia," Mr Suthep said.
Meanwhile, the Cambodian government accused Thailand of damaging ancient jungle temples.
The Cambodian defence ministry said in a statement that the Thai attacks had caused damage to the ruins, without giving further details.
"We do not know the extent of the damage to the temples yet," said ministry of defence spokesman Chhum Socheat in Phnom Penh.
Cambodia has also accused Thailand of using aircraft and poisonous gas in the recent fighting -- claims that Bangkok has strongly denied.
It also accused Thailand of firing more than 300 artillery shells on civilian villages.
Thailand recently admitted using controversial munitions designed to burst into bomblets during the February fighting.
Posted by CAAI News Media at 6:11 am