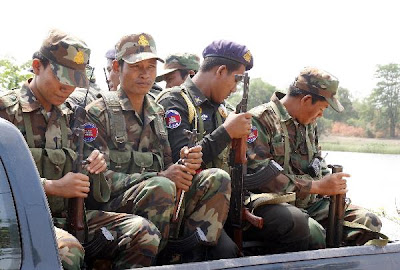 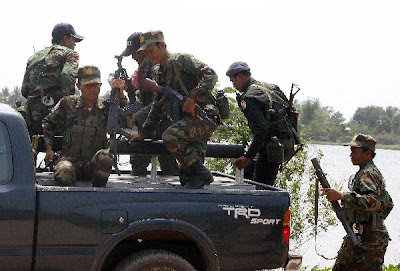 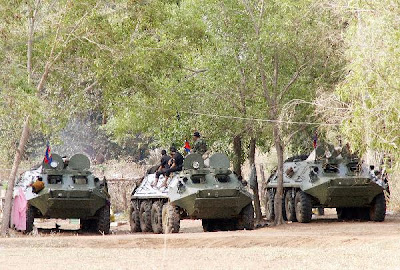 
via CAAI
English.news.cn
2011-04-25
PHNOM PENH, April 25 (Xinhua) -- Gunfire exchanges between Cambodian and Thai troops over the border area at the Ta Moan temple and Ta Krabei temple in Oddar Meanchey province broke out again late Monday, said a field military commander on Monday.
"The fighting started again this evening at 6:15 p.m. at the two temples," Suos Sothea, deputy commander of the artillery unit, told Xinhua by telephone from the battle fields.
"Thai forces have fired both small guns and heavy artilleries on our troops over the areas," he said.
"We have also exchanged some gunfires to defend our territory integrity from invasion," he said.
The fighting marks the fourth straight days of armed clashes between the two countries' troops.
The last three days of clashes resulted in six deaths and 16 injuries of Cambodian soldiers and five deaths and 17 injuries of Thai troops, and tens of thousands of the two countries' people have fled home for safe shelters.
The border between Thailand and Cambodia has never been completely demarcated. Cambodia's Preah Vihear temple was enlisted as a World Heritage Site on July 7, 2008. But Thailand claims the ownership of 4.6 square kilometers (1.8 square miles) of scrub next to the temple. Just a week after the enlistment, Cambodia and Thailand had a border conflict, triggering a military build-up along the border, and periodic clashes between Cambodian and Thai soldiers have resulted in the deaths of troops on both sides.
Editor: Chen Zhi
Posted by CAAI News Media at 6:20 am