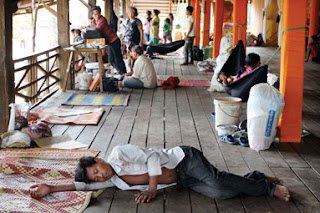 
via CAAI
Tuesday, 26 April 2011 15:02Cheang Sokha and Thomas Miller
Oddar Meanchey province
The death toll has risen to 12 following a fourth straight day of fighting along the Thai-Cambodian border near Oddar Meanchey province, with negotiations between the two sides stalled in the face of the bloodiest fighting the Kingdom has seen in years.
Clashes broke out again late yesterday evening and lasted more than one hour as both sides exchanged heavy artillery shells and gunfire.
Roth Sopheaphal, a soldier at the front line, said the latest clash broke out at about 6pm at Ta Moan temple and then spread to Ta Krabey temple, about 10 kilometres away.
There were no reports of casualties from last night’s clash as The Post went to press. The conflict, which both countries accuse one another of starting, has thus far left at least 12 soldiers dead – seven Cambodians and five Thais – and dozens wounded over four days. One Cambodian soldier remains missing and thousands of civilians on both sides of the border have been displaced.
Late night fighting on Sunday took the lives of one Cambodian and one Thai soldier, officials and troops said yesterday. No civilian casualties have been reported.
The Ministry of Defence issued a statement claiming that two Thai military jets had flown yesterday over the hilly jungle along the border that houses the temples of Ta Moan and Ta Krabey, centuries-old sites that have been flashpoints for fighting since it first broke out on Friday. The Defence Ministry also said Thailand had continued shelling Cambodian villages as far as 22 kilometres from the border.
Veerachon Sukondhadhpatipak, deputy spokesman for the Thai Royal Army, said he had no report of Thai planes flying over the border area.
Meanwhile, diplomatic manoeuvring to resolve the crisis stalled yesterday after Indonesian Foreign Minister Marty Natalegawa called off planned meetings with his counterparts in Phnom Penh and Bangkok.
Ever since similar clashes that erupted in February near Preah Vihear temple, about 150 kilometres from the fighting in Oddar Meanchey, Natalegawa has been working with officials from both countries in an attempt to mediate the dispute.
Bernard Sinaja, chief of the political section at the Indonesian embassy in Phnom Penh, said yesterday that the meetings would be rescheduled “as soon as possible”. Koy Kuong, spokesman for the Cambodian Foreign Ministry, said he had not been given a reason for the abrupt cancellation.
Later yesterday, the Bangkok Post reported that Thai Foreign Minister Kasit Piromya had said he would meet Natalegawa and Foreign Minister Hor Namhong on Thursday.
Meanwhile, Cambodia and Thailand dug into their respective positions on whether to allow Indonesian military observers to monitor the border area and ensure a ceasefire. The two countries accepted the observer proposal during negotiations in February, but Thailand has since been reluctant to finalise the arrangement, earning criticism from Cambodian officials.
“If there is no third party to monitor a permanent ceasefire, the [Thais] will continue to invade Cambodia… and accuse us of initiating the fighting,” Koy Kuong said.
Veerachon would not say under what conditions Thailand would allow outside observers to monitor a ceasefire, saying the issue was “quite complicated” and should be settled bilaterally.
“All the agreement[s] should be made through the bilateral level,” he said.
ADDITIONAL REPORTING BY VONG SOKHENG
Posted by CAAI News Media at 11:08 pm