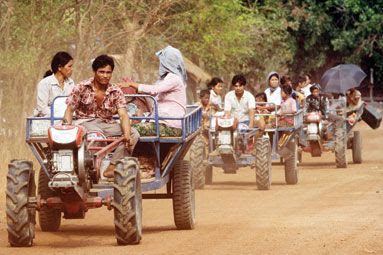 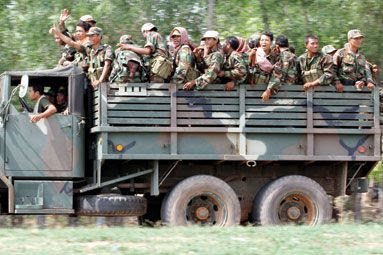 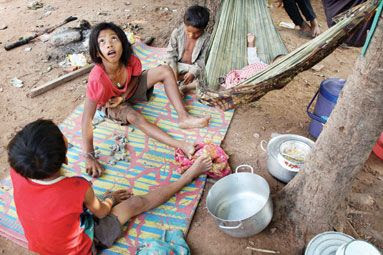 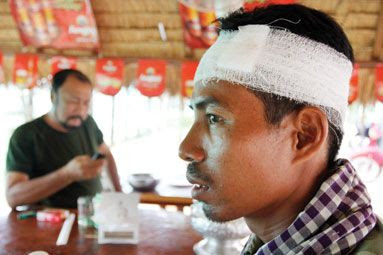 
Oddar Meanchey province
They came in a convoy down the dirt road that leads away from the Thai border in Oddar Meanchey’s Banteay Ampil district – Cambodian villagers, their belongings piled onto tractors, fleeing the fierce fighting that has left at least 12 troops dead since last week.
Evacuees have gathered thoughout Oddar Meanchey’s Samroang town, roughly 45 kilometres from the border – in pagodas, outside government offices and at the O’Russei primary school. Others have gathered in villages in nearby Banteay Ampil district, where the Cambodian Red Cross has set up relief services to go along with those in Samroang.
Uy Sam Ath, director of the disaster management department at the Cambodian Red Cross, said yesterday evening that a total of 22,384 people in Oddar Meanchey had been displaced by the fighting, with 11,558 taking refuge in Samroang town and another 10,826 in Banteay Ampil. At least nine homes in Banteay Ampil district have been destroyed by shells from Thailand, he added.
Luon An, deputy governor of Oddar Meanchey, said significant numbers of villagers were still streaming into the relief sites yesterday after fighting first broke out on Friday.
“We expect that the numbers will continue to increase,” he said while overseeing relief operations in Samroang town’s Samroang pagoda.
At nearby Wat Tham Mayuth, also in Samroang, displaced villagers set up tents and hammocks on the pagoda grounds and left laundry out to dry on the railings of the temple. Vendors had arranged makeshift stands selling food and drinks as displaced residents queued up to receive medicine from a mobile clinic.
Chhun Samy, 67, said she and other residents of Banteay Ampil’s Por Thivong village had fled their homes on Friday immediately after the clashes broke out, leaving their belongings behind.
“We left and brought nothing with us,” she said, looking after three young children nearby. “I don’t know when we will be allowed to go back home.”
Oun Vy, chief of Banteay Ampil’s Kokmon commune, said Sunday that nearly all of his constituents had fled the fighting, but would not be able to stay away from their homes for long because they needed to cultivate their crops.
“99 percent of the villagers here are farmers, and this is the time they need to farm, but they are fleeing bombs instead,” he said.
Families of evacuees have received 20-kilogramme bags of rice along with cookware and blankets from the Cambodian Red Cross. Uy Sam Ath said his organisation had the situation under control, but could have difficulty providing for all those displaced in the face of prolonged fighting.
“We have the capacity to cope, but if the Thai soldiers continue [attacking], we have to appeal for help,” he said.
Along the road to the border in Kokmon commune, stores were shuttered and stray dogs scampered among abandoned homes. The commune’s Kork Svay village faced a barrage of shelling on Saturday, Oun Vy said, destroying one home and forcing out nearly all residents who had not yet fled.
With negotiations to end clashes at a standstill, the thousands displaced on both sides of the border now have little to do but wait.
“I don’t want to stay here much longer because I don’t want to be away from home,” said Banteay Ampil resident Keo Sokdana, taking refuge at Samroang’s Wat Tham Mayuth. “There is no fighting there, but we are afraid of the bombs.”
Posted by CAAI News Media at 11:02 pm