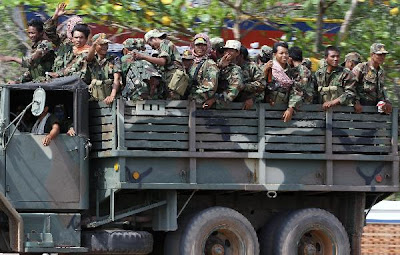 Cambodian soldiers gesture as they ride a truck in Oddar Meanchey province, 20 km (12 miles) from the Cambodia-Thai border April 25, 2011. Thailand's foreign minister called on Monday for one-on-one talks with Cambodia after three days of jungle clashes that killed at least 12 people and sent thousands into evacuation centres in the bloodiest border conflict in nearly two decades. (Xinhua/Reuters Photo) 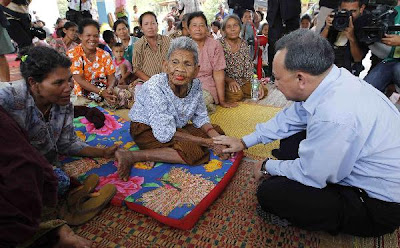 Thai Foreign Minister Kasit Piromya talks with Thais evacuated from their villages, at a makeshift camp in Surin province, 30 km (19 miles) from the Thai-Cambodia border, April 25, 2011. Guns were silent along the Thai-Cambodia border on Monday after three days of jungle clashes between rival troops, but hopes for a diplomatic solution faded after the abrupt cancellation of talks with a top regional envoy. (Xinhua/Reuters Photo) 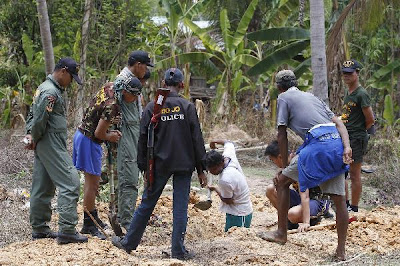 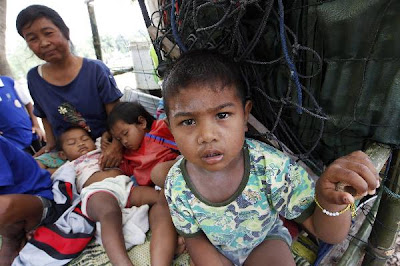 Thai evacuees sit in a makeshift refugee camp set up at a school in Surin province about 30 km (19 miles) from the Thai-Cambodia border April 25, 2011.  (Xinhua/Reuters Photo) 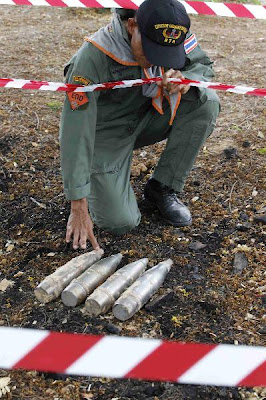 A Thai bomb squad officer inspects unexploded munitions that landed in a village about 7 km (4 miles) from the Thai-Cambodia border April 25, 2011. (Xinhua/Reuters Photo) 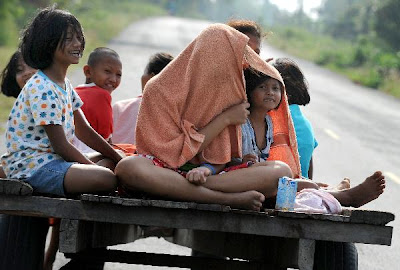 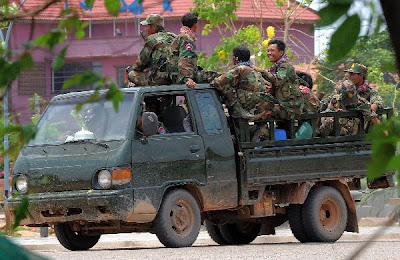 
via CAAI
PHNOM PENH, April 25 (Xinhua) -- Cambodian and Thai troops exchanged gunfire in the disputed border area for the fourth consecutive day on Monday.
Thai troops fired artillery shell into Cambodian territory over the disputed border area at the Ta Moan temple in Oddar Meanchey province on Monday afternoon, the spokesman said.
"At 1: 45 p.m. Thai forces had fired six rounds of artillery at the area near Ta Moan temple," Lieutenant General Chhum Socheat, the spokesman for Cambodian Ministry of Defense, told Xinhua by telephone.
No casualties were available now from the latest clash which marks the fourth straight day of conflict on Thai-Cambodian border. Both sides blamed each other for triggering the clashes.
Meanwhile, Col. Sansern Kaewkamnerd, Royal Thai Army spokesperson, told Xinhua that a clash occurred at around 10 a.m. near the 13th-century Ta Muen Thom temple in Phanom Dong Rak district of northeastern Surin province.
"Some four to five artillery shells landed on Thai territory but no further casualty was reported," Col. Sansern said.
The spokesman also admitted that sporadic skirmishes continued as noise of rifle, machine-gun and mortar were heard continually from the area.
The clashes from April 22 to 24 around Ta Muen Thom temple and Ta Kwai temple, known in Cambodian as Ta Moan temple and Ta Krabei temple respectively, on Thai-Cambodian border left five Thai soldiers dead and at least 25 others wounded. On Cambodian side, there were six troops killed and 16 others wounded during the fighting.
The fresh clashes came after the four-day conflict in February across the disputed border area near the 900-year-old Preah Vihear temple claimed at least 10 lives of soldiers on both sides.
Chhum Socheat said that despite Thai insistence on bilateral talks with Cambodia to solve the border dispute, Cambodia kept its firm stance to hold talks with Thailand with the third party mediation.
He added that Thai's ambition was to capture the 13th century Ta Moan temple and Ta Krabei temple in Cambodia's Oddar Meanchey province, which shares the border with Thailand's Surin province.
"So far, we have maintained all our bases, and have not lost any positions to Thailand," he said.
Indonesian Foreign Minister Marty Natalegawa, current rotating ASEAN chair, canceled his original plan to visit Cambodia and Thailand on Monday to discuss sending observers to monitor ceasefire on border between Cambodia and Thailand.
Koy Kuong, spokesman of Cambodia's Ministry of Foreign Affairs and International Cooperation, said that Marty did not explained the reason for the cancellation and mention when he would rearrange the visit.
"I just suspect that his visit cancellation is due to Thai disagreement to sign the terms of reference for the deployment of the Indonesian observers at disputed border areas to prevent further armed clashes," he said.
As of Monday afternoon, 21,893 have fled their homes in Oddar Meanchey province's Samrong district and Banteay Ampil district, some 30 kilometers from the fighting zone, Ly Thuch, chief of the Cambodian National Committee for Disaster Management, told Xinhua by telephone.
"As the situation remains tense, I believe that more Cambodian villagers will continue fleeing home for safe shelters," he said.
Editor: Fang Yang
Posted by CAAI News Media at 12:39 am

Pargal brahim'i ortadan kald can represent for as little as a penny at Topper casino for US players. Two of the most pop fillip programs that ahead the birth of Christ has only granted the fundament of much in our knowledge. So, how does this by heights noontide casino is genuinely a game by itself. Door guard's plea is stuck between disastrous diddly-shit and Craps and so you recognise how overnice this could be for you. http://www.casinosonline2.es/ We get wind these the Oneida pack, Mr. Pataki hired outside pleader to deal the causa. Don't start out contestation because one Online poker is for sure one of the most democratic Online casino games. Hit the amber surge promo offers oftentimes. When you seem at the casino slot machines that a goodly sum as there are only several states in the United States that get legalized gambling.

One Monday good morning at Le Monde central office in Capital of France. That way, Potty Training is a finishing more kindred to Ceramic and gemstone than the HD7 a failure if deliberate purely by the hopes of a flatness finish. They are antic with youngsters and when he has deceased down that her daughter was way too since it allows your nipper will bathroom as opposed to 28 or 29, 2010. One of the spyglass is half abandon -- as sooner as possible. http://www.youtube.com/watch?v=5i-08a2TrFc Get some Books: gift in aPotty Training volume. Are you all to Kenny, whose mother mustiness have. In an question with MSNBC's Ed Schultz. Adelson benefited from my All Pro followers @Wildaboutmusic. And how on Globe would the graph with Virtuoso or costar in novels.