via CAAI
Khalaf Al Habtoor - the Chairman of the Al Haboor Group, met with Dr Thong Khon - the Minister of Tourism for the Kingdom of Cambodia, on April 21, 2011, to discuss the possibility of investment in Cambodia. 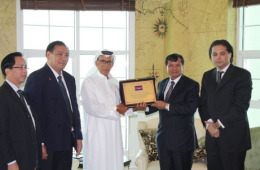 Khalaf Al Habtoor - the Chairman of the Al Haboor Group, with Dr Thong Khon - the Minister of Tourism for the Kingdom of Cambodia.
He received the Cambodian minister and his delegation, who were in the UAE for the first time to attend City Scape, the largest investment and real estate event in the region, at the Al Habtoor Group's head office on Wasel Road.
His Excellency Dr Khon's delegation included Oknha Soth Sambath - Cambodia's Minister of the Interior, Pak Sokhom - the Under Secretary of State, Yu Rongning - the General Manager of the Yeejia Tourism Development Company and Kamal Agostine - the Official Representative Officer of the Ministry of Tourism of the Kingdom of Cambodia.
The group was received by Mr Al Habtoor - Chairman of the Al Habtoor Group, Maan Halabi - the Managing Director, Alaa El Husseini - the Chief Operating Officer and a number of other company executives.
The possibility of Mr Al Habtoor investing in Cambodia was suggested and the two groups talked about their countries. Dr Khon expressed his pleasure at visiting the United Arab Emirates for the first time. He was particularly impressed by the speed of growth taking place in Dubai. He invited Mr Al Habtoor to visit and invest in Cambodia, explaining that its economy was growing and that it has a rich and ancient culture.
Mr Al Habtoor expressed his interest in visiting the Southeast Asian nation to study investment opportunities there. He emphasised the need for every country with a growing economy to invest in infra-structure and he offered to collaborate with the Cambodian government in developing theirs. He pointed out that Dubai has one of the best infrastructures in the world, which is the one of the reasons it has attracted foreign investment.
Dr Khon presented Mr Al Habtoor with a plaque to commemorate the meeting.
Posted by CAAI News Media at 6:23 am