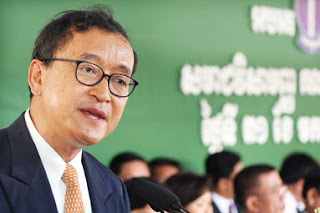 Photo by: Heng Chivoan
Sam Rainsy speaks during a press conference in 2009.
IN DATES Sam Rainsy in court
April, 2008
During a commemoration at Choeung Ek killing fields, Sam Rainsy accuses Hor Namhong of having been a chief of the Boeung Trabek prison under the Khmer Rouge.
December, 2008
French civil court finds Sam Rainsy guilty of defaming Hor Namhong and fines him a symbolic €1 fine for the same allegations in his book Rooted in Stone.
October, 2009
Sam Rainsy goes into self-imposed exile in France after charges are laid against him relating to his uprooting posts demarcating the Cambodia-Vietnam border in Svay Rieng, which he claimed encroached on Cambodian territory.
January, 2010
Sam Rainsy is found guilty of racial incitement and destroying border demarcation posts. He is sentenced to two years in jail and fined US$1,927.
September, 2010
Sam Rainsy is found guilty in absentia of altering public documents and disinformation over maps he produced of Cambodia’s border with Vietnam in Svay Rieng. He is sentenced to 10 years jail and fined US$14,000.
http://www.phnompenhpost.com/
via CAAI
Tuesday, 26 April 2011 15:02Meas Sokchea and David Boyle
Embattled opposition leader Sam Rainsy now faces a total of 14 years in prison should he return to the Kingdom after being handed a two-year jail term yesterday in a defamation case brought by Foreign Minister Hor Namhong.
Sam Rainsy was found guilty in absentia yesterday at the Phnom Penh Municipal Court on charges of defamation and inciting discrimination.
The charges came in connection with public comments Sam Rainsy made in 2008 alleging that Hor Namhong headed the Khmer Rouge prison at Boeung Trabek.
Delivering the verdict, presiding judge Seng Neang told the court that Sam Rainsy’s comments had tarnished the reputation of Hor Namhong, who himself was a victim of the Khmer Rouge regime, as well as the reputation of the Cambodian Government. He said an additional charge of inciting discrimination had been added because of the public nature of the remarks, made during a commemoration ceremony at the killing fields of Choeung Ek in 2008.
“The case of the accused has affected the public and affected the victim’s reputation,” Seng Neang said. Sam Rainsy was also fined eight million riel (US$1,972) as a result of the conviction.
The opposition leader was forced to pay a symbolic one euro penalty after losing a case against Hor Namhong in a French court in 2008 in relation to similar comments made in his autobiography.
Sam Rainsy now faces a total of 14 years in prison as a result of three separate convictions should he return to the Kingdom. Last year, he was convicted in a pair of cases in relation to a protest he staged on Cambodia’s eastern border in 2009 to protest against alleged Vietnamese encroachment.
Sam Rainsy is currently based in France and has led the Sam Rainsy Party from abroad since fleeing the country to avoid the initial case pending against him in 2009.
Choung Choungy, Sam Rainsy’s lawyer, did not appear at the court yesterday because he said his client was “not interested” in the case, though he condemned the verdict after it was handed down.
“This is not justice for His Excellency Sam Rainsy,” Choung Choungy said.
Kar Savuth, Hor Namhong’s lawyer, expressed satisfaction with the decision outside the court yesterday.
“Sam Rainsy’s allegation is defamation and also incitement, turning national and international opinion against His Excellency Hor Namhong and the government,” he said.
Both the charges of defamation and inciting discrimination come from UNTAC criminal code, preceding the current penal code that was adopted after Hor Namhong filed the complaint against Sam Rainsy in 2008.
With the convictions stacking up against Sam Rainsy, Cambodian Centre for Human Rights president Ou Virak said it was unlikely that a political settlement would be brokered in the near future to allow the opposition leader to return to the country.
“That’s what the government wants – to keep Rainsy away, remove any real opposition threat to the ruling party and keep the legitimacy of their rule while still receiving donor support,” he said.
Posted by CAAI News Media at 10:54 pm