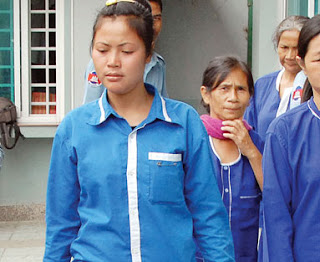 
Tuesday, 26 April 2011 15:02Buth Reaksmey Kongkea
A 13-year-old girl testified yesterday at the close of the trial of three women charged with recruiting underage child prostitutes in Phnom Penh.
Deputy prosecutor of the Phnom Penh Municipal Court, Keu Bunnara, said yesterday that Keo Socheat, 56, Morm Pheang, 50, and Son Savin, 26, were arrested on May 31 last year, over allegations that they recruited at least one girl for child prostitution purposes at a guesthouse in capital’s Tuol Kork district.
He added that police from the Anti-Human Trafficking and Juvenile Protection Office at the Ministry of Interior made the arrest, when a 13-year old girl was brought to the Tumnerb guesthouse in Phsar Depot III commune to allegedly have sex with a client paying $1,200 per week.
The 13-year-old victim testified yesterday that on May 15 last year she left her home in the Anduong Meas commune of Takeo province’s Prey Kabas district to find work as a garment worker in Phnom Penh.
She stayed in Meanchey district’s Stung Meanchey commune with suspect Son Savin, who tried to help her find work as a waitress, but she was too young to be employed.
The victim said that on May 25 last year she met with Keo Socheat who promised to find her work as a garment worker.
“She told me that there was a work for me with a good salary and I was very happy to hear this. I hoped that I would able to make money to support my mother who lived in the province,” she said, adding that Keo Socheat took her to have her blood checked for sexually transmitted diseases and her virginity confirmed at a clinic.
“I was later sent by her to sleep with a man at the guesthouse for a salary of US$200 per week. However, I was very lucky because I was immediately rescued by the police while walking into the room.”
The victim has asked for $2,000 compensation from the suspects and Keu Bunnara has asked the court for a heavy sentence to prevent future incidents of child prostitution.
“Keo Socheat is a human trafficker in Cambodia and is also the mastermind of bringing this victim to have sex with a [client] at the guesthouse. Morm Pheang and Son Savin are the accomplices in this crime,” Keu Bunnara alleged.
Chin Da, a police officer at the municipal Anti-Human Trafficking and Juvenile Protection Office, said that police had spent a week investigating the three suspects before their arrest.
“According to our investigation and research, these people used to bring many young girls to have sex with the guests at hotels and guesthouses in Phnom Penh.
“They were selling the victims for sex from $1,200 to $1,500 per week and they could get a commission of between $150 and $200 per girl,” he said yesterday.
Keo Socheat confessed to recruiting the victim for prostitution in court yesterday, but claimed that she did not know she was breaking the law.
“I accept that I brought the victim to sleep with a man at the guesthouse. The reason why I have decided to commit this is because she had asked me to do it. On the other hand, I could make some money to support my family,” she said.
“I did not know that my activity is against the law. So I would like to ask the court to reduce my sentence.”
Son Savin claimed in court yesterday that she was not involved with the crime and asked to have her charges dropped.
“I am innocent person,” she said.
Presiding Judge of the Phnom Penh Municipal Court, Ker Sakhorn, said yesterday that purchasing child prostitution or recruiting children as prostitutes is a serious crime and the court will issue a verdict for the three suspects on May 5.
Posted by CAAI News Media at 10:48 pm