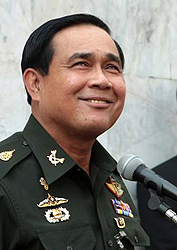 Gen Prayuth Chan-ocha
http://www.bangkokpost.com/
via CAAI
Published: 25/04/2011
Online news:
The government will decide whether to go to war with Cambodia over the disputed border, and the army is ready to follow orders from the government, national army chief Prayuth Chan-ocha said on Monday.
However, he believed there should be bilateral meetings, not a war, because people from both sides were being hurt by the conflict, Gen Prayuth said.
"If Cambodia doesn't want to negotiate, then it will not be necessary for us to negotiate either," the army chief said.
Thai troops sent to the border area had not retreated, and had retaliated in kind.
"The Foreign Ministry, the Defence Ministry and the Thai armed forces don't agree with having third-party observers in the disputed border area, but if it is required there must be regulations to cover it and all troops from the two countries must move out of the area.
"I don't think there is any country that wants foreign troops to invade its territory, and it is not necessary to have third-party observers at this time," Gen Prayuth added.
Posted by CAAI News Media at 12:01 am