Is the Thai-Cambodia standoff a conflict of convenience? 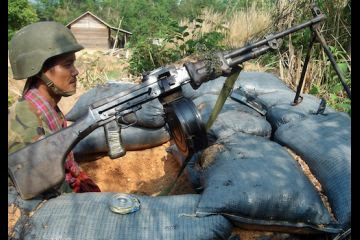 A Cambodian soldier stands guard near the Cambodia-Thailand border in Oddar Meanchey province on April 26, 2011, amid tension following deadly exchanges of fire across the border. Cambodia accused Thailand on April 25, of damaging ancient jungle temples at the centre of their bloodiest fighting since a bitter border dispute flared up almost three years ago. (AFP/AFP/Getty Images)
http://www.globalpost.com/


Media, experts suspect darker motives behind bloody border clash
Patrick WinnApril 26, 2011
A cursory review of the deadly tit-for-tat shelling along the Thai-Cambodia border suggests two nations are killing each other to claim grounds surrounding an ancient Hindu temple.
However, as I recently wrote, "the two nations are ostensibly warring over less than two square miles of scrubby land. But this disputed territory — devoid of gems, oil or any valuable resource — has also become the focal point of a struggle to preserve national honor and save political face."
Are there even darker motives afoot?
Op-eds and reports in the Wall Street Journal, Time Magazine and The Economist are now openly suggesting that the Thai military may be whipping up conflict in a wag-the-dog game to stoke a national crisis and thus create context for calling off coming elections.
The army's favored party, now in power, could possibly lose the election. Victory for the opposition could spell out amnesty for fugitive ex-premier Thaksin Shinawatra, the populist mogul minister bounced by the military in a 2006 coup. That scenario is unimaginably horrid to the powerful military figures who booted Thaksin in the first place.
Wagging the dog only works if the dog doesn't know it's being wagged, right? If Western media outlets were to uncover this alleged game, wouldn't this subterfuge fail?
Only if Thai voters read English-language outlets such as the Wall Street Journal. And, for the most part, they don't.
Thai papers, which are less apt to challenge the military, offer a blow-by-blow account of Thai soldiers defending their ground and sustaining attacks from "Khmer troops."
In one prominent Thai daily, Matichon, we have the foreign minister declaring that "patience has run out" and that "we won't accept living under Khmer bullets anymore." Competitor Thai Rath has accounts of Cambodian soldiers "violating territory." Photos show wounded Thai troops wheeled off on stretchers and displaced villagers squatting on shelter floors.
We also have the deputy Thai prime minister sounding downright exasperated at speculation the election might be cancelled.
"I've had to answer this question everyday, whether there will be an election or not," Thailand's deputy PM, Suthep Thaugsuban, told Matichon. "It's positively clear. I've yet to convey anything that would create misunderstanding among our brothers and sisters."
Meanwhile, Thailand's interior minister confirms that, actually, the clashes may prevent the parliament dissolution that would precede new elections. And Thaksin's camp has even had to deny a wild conspiracy that the self-exiled mogul is secretly commanding Cambodian soldiers to attack Thailand.
Is the military fighting to preserve Thailand's territory and honor? Or is it staging conflict to upend a coming election?
The answer depends on where you get your news.
Posted by CAAI News Media at 11:46 pm