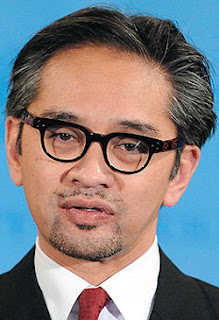 
Indonesian Foreign Minister Marty Natalegawa's abrupt decision not to visit Cambodia and Thailand yesterday clearly indicates the Asean chair's efforts to resolve the border problem between the two countries have so far been frustrated.
Mr Marty was scheduled to visit Cambodia first and then fly on to Thailand to discuss the final draft of the terms of reference (TOR) on placing Indonesian observers in the disputed area on the Thai-Cambodian border.
A government source said Mr Marty told Thai officials that he had "rescheduled" rather than "cancelled" the trip.
It has been speculated that last week's fresh outbreak of violence in the disputed area may have influenced the decision.
Cambodian Foreign Ministry spokesman Koy Kuong said Mr Marty has been expected to sign an agreement to deploy Indonesian observers at the border.
But it remained unsure whether Thailand would sign.
Cambodia has offered its acceptance of the draft. The source said Thailand is ready to sign the TOR with Indonesia but Thai Foreign Ministry spokesman Thani Thongphakdi says there had been a "technical" problem.
This could be why Mr Marty asked to reschedule the trip, rather than the latest border clashes.
Foreign Minister Kasit Piromya said the delay was because Thailand wants to change some wording in the TOR referring to the observers' immunity issue.
"[Once the draft is accepted] I will ask for approval from the cabinet before exchanging TOR documents with Mr Marty on Thursday during the Asean Ministerial Meeting on social and culture issues to be held in Indonesia," Mr Kasit said.
Indonesia, as Asean chair, became involved in the Thai-Cambodian border problem following Phnom Penh's request to bring a third party into the dispute.
Mr Marty recently sent both countries' accounts of the most recent clashes to the United Nations Security Council (UNSC).
He is also seen trying to speed up adoption of the TOR in order to demonstrate his engagement to the UNSC, from which Cambodia has requested intervention.
Under the TOR draft, Cambodia will allow Indonesian observers to be stationed in three border locations, including the 4.6-square-kilometre disputed zone.
But Thailand is strongly opposed to the presence of observers in the area.
Thailand will allow the observers in four locations in Si Sa Ket province which saw fighting between the two sides during Feb 4 to 7.
However, Thailand can claim success in the barring of forces setting up around the Preah Vihear temple or the Keo Sikha Kiri Svara pagoda nearby.
"Asean and the TOR are just the passageway for Cambodia to bring the dispute to the International Court of Justice (ICJ) again," the same source said.
Most Thai officials believe that if Cambodia thought it could win another ICJ case, it would have no hesitation in submitting the issue to the court.
But as Cambodia is apparently not so confident of victory this time, it has tried to involve a third party's hand for this objective, the source said.
The latest clashes extended to Surin province's border, which is not covered by the existing TOR.
Posted by CAAI News Media at 9:44 am