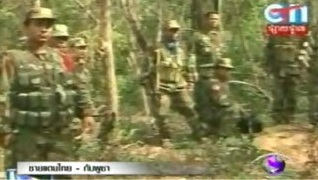 
via CAAI
BANGKOK, April 25 - Thai army commander-in-chief Gen Prayuth Chan-ocha on Monday reaffirmed the army is ready to engage in battle with Cambodia if the government orders so, standing firm that the Indonesian observers will be allowed to observe the border only if Cambodia withdraws its troops from the conflict zone and returns to dialogue.
The army chief made his remarks following criticism over the operations of the Thai military in the latest border clashes with Cambodia.
The renewed border clash occurred near the Ta Kwai and Ta Muan Thom temples in Surin on Friday. Sporadic clashes have been reported since then as border demarcation remains disputed by the two neighbouring countries despite attempts to resolve the problem through meetings of bilateral commissions at several levels.
Five Thai soldiers were killed while 35 were wounded during the four days of clashes. About 25,000 border area residents in Surin and about 4,500 others in Buri Ram have been evacuated from their homes to temporary shelters.
Gen Prayuth stated troops have been deployed in every conflict zone to protect Thailand's sovereignty and have never retreated even a single step from the border.
"For those who blame the army for failing to adopt active strategy: Do they want us to invade the other country's territory?, Gen Prayuth asked rhetorically.
Now the soldiers are staying fixed at the Thai border and we are ready to fight if ordered by the government, but [whether] the government can do it or not depends on the bilateral agreements that we have made with [our] neighbour,” the army chief said.
Gen Prayuth noted that whether the battle will occur or not depends on the governments of the two countries, adding that war has not been declared and that the latest incidents are only normal clashes along the border.
He stated that if a third country wants to intervene in the talks between Thailand and Cambodia in case the parties cannot continue their bilateral talks, such action will be accepted only when Cambodia withdraws all its troops from the disputed areas.
"There must be no Cambodian soldiers at Preah Vihear temple, or in local communities and temples, otherwise no observers will be allowed to do their work," Gen Prayuth asserted.
The army chief said that concerned agencies, including the Ministry of Foreign Affairs, the Ministry of Defence, the Royal Thai Armed Forces Headquarters and the three armed forces disagreed with having third country observers, but if necessary, the army has already made its stance clear to the Abhisit government that all troops must leave the disputed Preah Vihear area.
Meanwhile, Cambodia accused Thailand of damaging the two ancient temples during three days of border clashes that killed 12 people on both sides.
Agence-France Presse (AFP) news agency reported Cambodia's defence ministry as saying in a statement that the Thai attacks had caused damage to the ruins, without giving further details.
"We do not know the extent of the damage to the temples yet," AFP quoted ministry of defence spokesman Chhum Socheat as saying. (MCOT online news)
Posted by CAAI News Media at 12:41 am